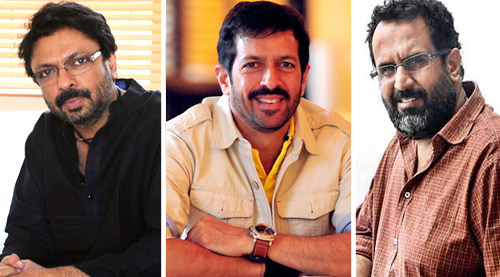 Bajirao Mastani is a success. Now how big it would eventually turn out would be known once the three day long Christmas weekend would be through, as that would decide the route that the historic magnum opus would take. For Sanjay Leela Bhansali, this is now set to be his biggest grosser ever and a perfect follow up to his last success Goliyon Ki Raasleela Ram Leela. Come 2016, and he would begin work on his next film with Eros, with whom he has an agreement for a three film deal. Word in the town is that the third would be mounted on an even bigger scale.

Meanwhile, for Eros - which has already given two huge blockbusters in Bajrangi Bhaijaan and Tanu Weds Manu Returns - is all set to reunite with the directors of these films.

"That's correct," informs our source, "Sanjay Leela Bhansali, Kabir Khan and Aanand L. Rai - each one of them has already signed up for a film each with Eros. The first amongst these to go on floors would be the Aanand L. Rai flick which tells the story of a dwarf."

Though quite a few speculations are being made around the superstar who would be stepping in for the challenging part of the dwarf, an official announcement is yet to be made.

"It would be made in due course of time, and it would be exciting for sure," our source adds, "Aanand shares a very good relationship. After Raanjhanaa and Tanu Weds Manu Returns, this film is going to be all the more entertaining."

On the other hand one waits to see what Kabir Khan picks up next. He also has a film lined up with producer Sajid Nadiadwala which means there are as many as two biggies in the offering from the filmmaker who hasn't hit a single false note, ever since he started his career with Yash Raj Films. Now after Bajrangi Bhaijaan, one expects him to scale further heights.

"All eyes are on the next project announcement with Sanjay Leela Bhansali as the director," the source continues, "Together, Eros and Bhansali have proven that they are a team. There was quite some debate around the eventual release of Bajirao Mastani on December 18. However, against all odds they stood by each other and decided to take on the mightiest of challenge coming their way. It isn't easy when more than half the industry and trade ask you to do the contrary, and you still stick by your conviction. All of that is possible only when you have conviction in your product. Now see the results for yourself."

There isn't any reckless decision making in the process though as good thought and practical views are being put together around what to be made next.

As for Eros, with many other successes under their belt this year (Welcome Back, Badlapur, NH10), they are indeed on a big high and a film each with three of country's biggest directors is only going to add to their repertoire.