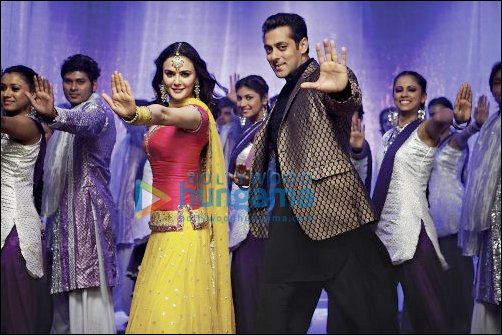 That Salman Khan is a yaaron ka yaar and would go that extra mile for a friend, is well known. That he makes a cameo appearance in pal Preity Zinta's film Ishkq In Paris is also well-known. What is not known is that Salman not only plays himself, that is Salman Khan, in Preity's Parisian production, he also gives a live stage performance in Paris, singing in front of a 5,000-strong shrieking, cheering fans in Paris as he croons the Punjabi-Bhangra number 'Kudiye Di Kurti'.

What's more, plans are now afoot to take Salman to Paris during the film's premiere for him to perform the song live on stage.

Confirming Salman's presence, director Prem Raj says, "Salman plays himself in Ishkq In Paris. He is the rocking superstar who visits Paris for a rocking stage performance to the beats of the song 'Kudiye Di Kurti'. We couldn't think of anyone to perform the song. We've clearly said it's Salman rocking on stage."

And now efforts are on to take Salman to Paris for the film's premiere for a live performance. Provided Salman finds the window in his schedule to fly off.