Salman Khan may be busy with his work commitments but a recent gesture of the superstar seems to be winning hearts on social media. Right before India celebrates its 75th Independence Day anniversary on August 15, Salman went on to meet the Navy force of the country at INS Visakhapatnam. The superstar not only interacted with the soldiers but also spent an entire day with all of them. 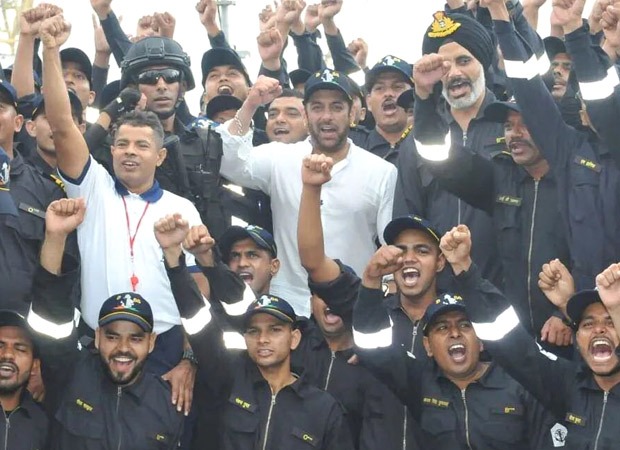 In a series of photos where we can see Salman Khan bonding with the Indian Navy soldiers, we could see the actor having a lot of fun. From cooking for them to hoisting the flag with them, the superstar shared many memories with them and also posed for a group photo with all the soldiers. In fact, the Sultan actor was also seen doing push-ups and showing off his muscles along with also signing autographs for many of them. The photos make you feel that it was truly a special day for the actor as well as the soldiers.

On the work front, Salman Khan will be seen in Kabhi Eid Kabhi Diwali aka Bhaijaan. The film, that underwent an extensive star cast change, will feature Siddharth Nigam, Jassie Gill, Sooraj Pancholi, Raghav Juyal among others along with Shehnaaz Gill and Pooja Hegde. The film is directed by Farhad Samji and the actor recently also completed a schedule of the same in Hyderabad. Along with that, he is all set to return with his Tiger franchise. Tiger 3 is expected to feature Katrina Kaif as well as Emraan Hashmi who is expected to play the antagonist in the film. The spy thriller will be directed by Maneesh Sharma.

Also Read: Salman Khan flaunts his ripped body while sweating it out at gym, see photo