After completing her schedule of the Sujoy Ghosh directorial in India, actress Kareena Kapoor Khan took off to her favourite city London where she is spending quality time with her family. Not too long ago, the actress’ Kapoor ‘Khandaan’ also met up with their new daughter-in-law Alia Bhatt. On the other hand, Kareena has been doing some touristy things during her recent vacation – like visiting her favourite café, attending music concerts etc. The actress was recently seen attending the Rolling Stones concert in London along with husband Saif Ali Khan and son Taimur Ali Khan. 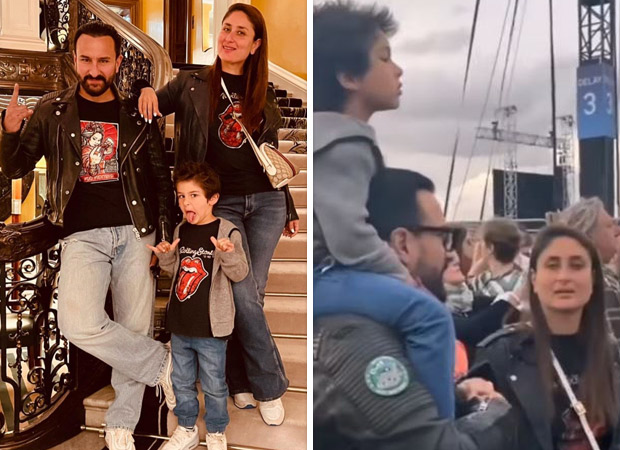 While we cannot spot the couple’s younger son Jeh, we saw that Saif Ali Khan, Kareena Kapoor Khan, and Taimur Ali Khan were prepping to attend the Rolling Stones concert in Hyde Park, London. A video of them from the concert went viral where we can see Saif carrying Taimur on his shoulders as he is seen in an intense discussion with Kareena.

On the other hand, Kareena Kapoor Khan had taken to Instagram to share photos on her story while getting ready for the concert. The actress had kept her look completely casual in denims, t-shirt and a jacket along with a sling and needless to say her, suave hubby Saif too matched her casual style.

As for work, Saif Ali Khan and Kareena Kapoor Khan have some interesting projects. While Saif will be seen in Vikram Vedha alongside Hrithik Roshan in the remake of the South blockbuster, Kareena will be making her OTT debut with the Netflix film, which is an adaptation of the Japanese novel Devotion of Suspect X. Besides that, Kareena will be gearing up for the release of Aamir Khan starrer Laal Singh Chaddha on August 11. On the other hand, Saif will be seen as the antagonist in the multi-lingual Prabhas starrer Adipurush.

Also Read: Kareena Kapoor Khan enjoys a holiday; says she ‘waited for so long’ for her cuppa