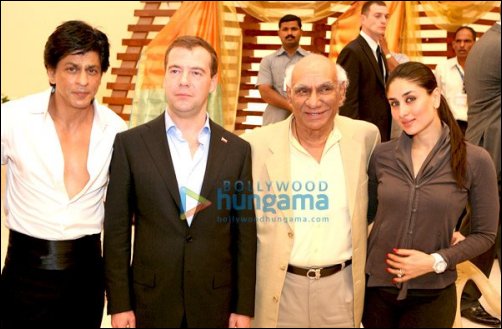 They say art and culture has no language and this became apparent during the recent visit of the Russian President H.E. Dmitry A. Medvedev to India when he took out time from his two day visit to head to Yash Raj Studio.

The agenda was quite simple; it was to further strengthen the ties of the two countries with special emphasis on promoting cultural exchanges between Russia and India and for the President to get an opportunity to directly meet with the members of the Indian film industry.

Not many know that Indian Films have been very popular with Russian audiences for over 60 years since the time of the legendary Raj Kapoor. And this fond memory helped to get the President's meeting off to a very cordial beginning and set the mood for what followed.

President Dmitry Medvedev was very happy that he was able to spend some time at the studio along with Yash Chopra and meet with the members of the Film Producers Guild of India and others. He said that his association and love for Indian films started way back in 1970 with Raj Kapoor's Shree 420, a popular and iconic film in Russia. He also said that cinemas are a common language and that he looked forward to receiving good proposals from the Indian Film Industry.

Even Yash Chopra was thrilled to meet the President as he said, "We are honoured to have the President of Russia, H.E. Medvedev, who took time off during his very short visit to India, to come visit us. Speaking on behalf of all of us present here and particularly the film fraternity, I am confident that this visit will most certainly help us to build on our already strong cultural and emotional relationship that has existed over many years. With this as our heritage, we should be looking at doing things collectively going forward."

While at the studio Yash Chopra invited the Russia President to the sets of Ra.One to meet Shah Rukh Khan and Kareena Kapoor. This was a special occasion for the President, being the first time that he was on the sets of an Indian film shoot. In his unique and witty style, Shah Rukh Khan said that there is a great diversity of Russian and Indian culture which can be mutually drawn upon. He suggested that we should go there to learn the ballet and Russia should come here to learn the bhangra!