Simmba lead actors Ranveer Singh and Sara Ali Khan shot a special song 'Aankh Marey' last month with Golmaal gang Arshad Warsi, Kunal Kemmu, Shreyas Talpade and Tusshar Kapoor in Hyderabad.  The original song was picturized on Arshad Warsi and was sung by Kumar Sanu. The song, ever since it released, has become a rage all over India. While team Simmba is enjoying the love that the recreated song is receiving, director Rohit Shetty revealed that it is Karan Johar, music composer Tanishq Bagchi and Azeem, music supervisor, who should be given credits for the song and not him. 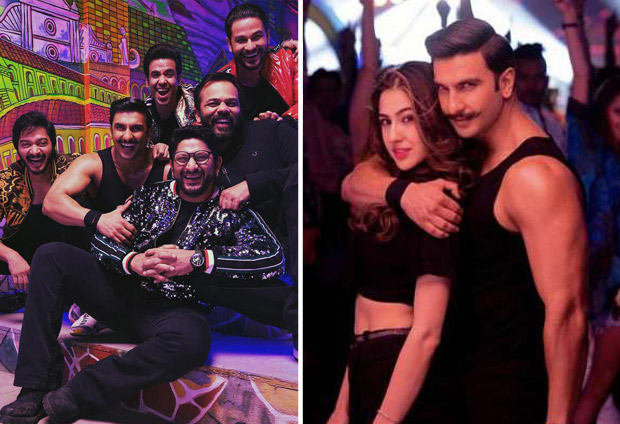 Speaking EXCLUSIVELY to Bollywood Hungama, Rohit Shetty said, "It just happened. The credit goes to Tanishq Bagchi and Azeem who is the music supervisor and Karan Johar for that matter. It was their idea. The whole idea of 'Aankh Marey' is of these three people and not me. They just came with the song and said let's make this and I just said 'Okay! Let's do it!' When they did production for the song, it was sounding really good. There are so many remixes that come in every film. This is that one remix which we knew will really work. That's what I felt. They got it in Tusshar Kapoor's voice as well."

Rohit Shetty, then, further revealed how Golmaal Gang Arshad, Shreyas, Tusshar and Kunal became a part of the song. "I called up all the Golmaal boys. They were like very happy to do it and it was very sweet of them. In one call, they all came to Hyderabad and we shot with them."

"The credit for Aankh Marey for becoming this rage goes to Tanishq, Karan and Azeem and not to me. It's their brainchild. I have just shot it and have given a scale to it and all the colours to it. But, where the sound production is concerned, Karan, Azeem and Tanishq should be given the credit," he said.