Ranveer Singh was star casted in an English play called Carry On At The Keyhole before he made his big debut with Band Baaja Baaraat in 2010. The actor has been under self-quarantine with his wife, Deepika Padukone and has the time to go through his old pictures. From posting throwback pictures of his childhood to his favourite desserts, he has been enjoying this much-needed break. 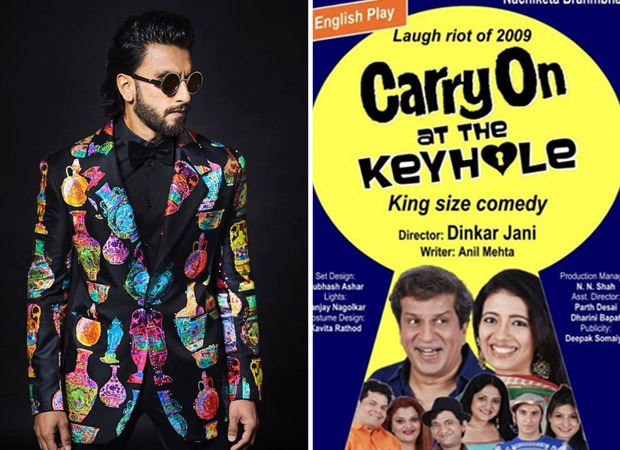 Along with his childhood picture, he also shared the poster of an English play that he starred in before his debut with the Yash Raj Films’ production. With some of the renowned faces of the industry, Ranveer Singh shared the stage with them before he became one of the biggest celebrities of the industry. He posted it with the caption, “Rummaging through my pictures. Found this gem ???? I’ll never forget these days ❤️.”

Ranveer says, “This is a poster for a small play in which I had a small part and the story goes that I used to be a struggler and I used to sit at Prithvi theatre with 2-3 others like me. We used to just sit there every day, look for odd jobs. One of them got information that an audition is happening in a college in Andheri for a small role in a small play and nobody wanted to go - I said I’ll go because I didn’t have anything at that time!”

He adds, “I thought to myself - ‘Acting acting hoti hai - koi bada chota kya hota hai.’ I went for the audition , I got the part and they were very impressed by my acting. When we put up the performance - I remember one was at St Andrews and even then I felt proud when I was performing at St Andrews stage because I used to perform on St Andrews stage as a student when I was in school. So , you know we had a few performances, I had the role of an interior decorator who was posing to be a homosexual man in order to attract more business and it was an old English double meaning comedy play that was headlined by Darshan Jariwala and directed by Dinkar Jani.”

Ranveer is one of the biggest showman’s of this industry today who looks forward to entertain the whole of India with every outing. Back then too, what drove Ranveer was this spirit of showmanship. He reveals, “I remember that whoever used to come and see the play used to always be impressed by my performance and I really took it very seriously and I gave it everything. I used to wear some of my own clothes and most of the people who came to watch the play were just friends and family whom I had informed that I am doing this performance and to come and see it.”

The superstar adds, “I remember meeting Yogesh Sanghvi (the producer of the play) at an awards show last year which is when we re-connected and it was a very emotional moment for him and for me - to meet after all those years - just to see his moist eyes , the pride in his eyes - ‘tu kahan se kahan pahuch gaya mere dost’ and I was also getting a bit emotional when I met him because he used to really like me , he used to be very kind to me. We had no money in that play but whatever he could he used to give me very generously. He was always very fair and kind to me. So ya it’s a very, very fond memory of mine from my struggling days.”

On the work front, he announced this morning that the release of his next Kabir Khan directorial, 83, has been delayed until further notice.

Also Read: Ranveer Singh shares a cute childhood picture with his sister and it is proof that he was the coolest kid