Last week, Ranbir Kapoor and Alia Bhatt married in an intimate ceremony attended by just close friends and family. Akash Ambani and his wife Shloka were among the few guests at the intimate ceremony. Akash and Shloka were spotted in various social media images from the occasion. Armaan Jain has now been added to this list by sharing a photo of the Ambani couple alongside Rishi Kapoor's sister Rima Jain, her sons Armaan and Aadar Jain, and Armaan's wife, Anissa Malhotra Jain. 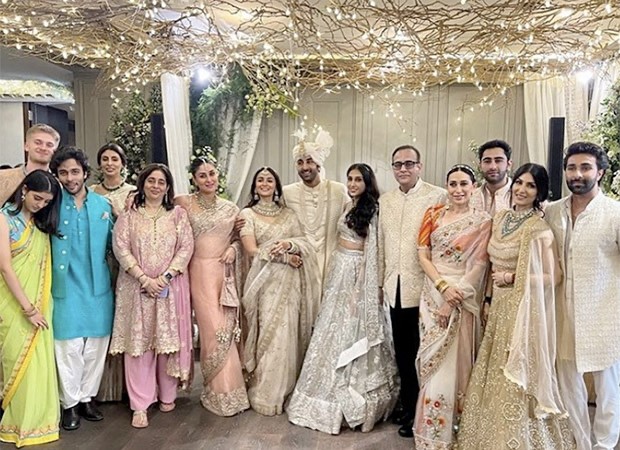 Armaan Jain has also uploaded images of himself with Alia Bhatt and Ranbir Kapoor, as well as with his cousins Kareena Kapoor, Karisma Kapoor, Nitasha Nanda, Zahan Kapoor, and Nikhil Nanda and his wife Shweta Bachchan. Navya Nanda (the daughter of Nikil and Shweta) was also photographed.

Anissa Malhotra, the wife of Armaan Jain, also shared a photo of groom Ranbir Kapoor smiling alongside Akash and Shloka Ambani. It was one of several images from Alia Bhatt and Ranbir Kapoor's recent wedding.

Alia Bhatt and Ranbir Kapoor married in Mumbai's Vastu neighbourhood. The bride's residence also hosted the Mehendi ceremony and the post-wedding feast. Alia Bhatt revealed in her wedding announcement, "Today, surrounded by family and friends, at home... on our favourite spot - the balcony where we've spent the last five years of our love - we married..."

Also Read: Alia Bhatt is all smiles as she is surrounded by her bridesmaids in unseen pictures from her wedding with Ranbir Kapoor