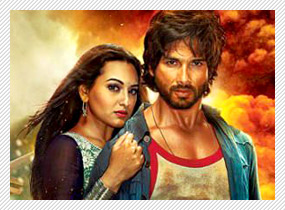 When Prabhu Dheva started work on R... Rajkumar, by no means would he have ever imagined that he was making something that would get an Oscar stamp to it in any form or shape. As someone who has believed in commercial cinema all through his career, the maker of films like Rowdy Rathore, Wanted and Ramaiya Vastavaiya woke up to a pleasant surprise when he was informed that Oscar authorities have shown interest in his Shahid Kapoor-Sonakshi Sinha starrer.

"Yes, the film has been approached by the Oscar library," confirms our source, "The prestigious library, that also houses scripts of iconic films like Devdas, Lagaan and Kal Ho Na Ho to name a few, have shown keen interest in the film's script."

Released last year, the film was not supported by many critics. However, super hit songs by Pritam along with some bone crunching 'masala' entertainment put together by Prabhu Dheva ensured that audience turned the film into a success. Add to that some good marketing and promotion by Eros along with NextGen Films and 2013 ended with a successful film while also ending Shahid's uninspired lean patch at the box office.

With the news trickling in that the script of his film will be included in the library while acting as a permanent reference to cinema students, producer Viki Rajani is obviously thrilled.

He said, "It's a huge honor and I am happy with this recognition for the film. Even though critics were not too kind on the film, audience gave it a green signal. In fact after a good theatrical response, the film is doing so well on satellite too. Its songs played right through the New Year parties and wedding celebrations. Now an Oscar stamp is further cherry on the cake."

The film has dialogues penned by Shiraz Ahmed and screenplay by Prabhu Dheva, Sunil Agarwal and Ravi S. Sundaram.