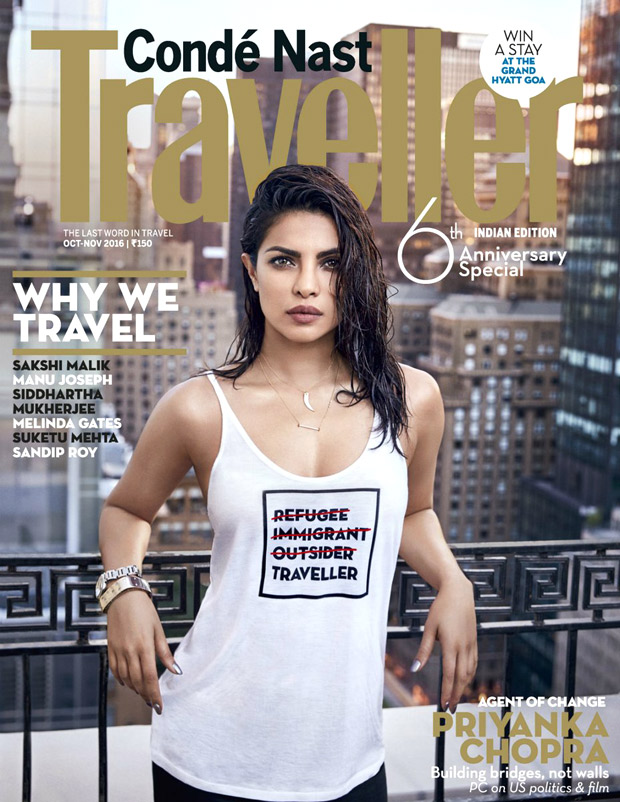 Priyanka Chopra is flying high with the immense amount of success in Hollywood. From starring as a lead in an American TV show to bagging a role in Baywatch movie to being the face of many prestigious magazine covers, Priyanka is setting new records with every step in her career.

Recently, Priyanka Chopra featured on the magazine cover of Conde Nast Traveller which is their anniversary special that calls her fearless and bold. In the issue, she talks about her nomad life, her commitment issues, her current work scenario and US politics.

But, Priyanka's latest magazine cover has managed to get her in an unpleasant controversy. It's the outfit that has caught everyone's attention and offended many people. The tank top struck out the words- Refugee, Immigrant and Outsider leaving the word Traveller untampered. It means that she is here to travel the world and other three words don't describe her.

Twitterati however were left fuming after the misuse of the word Refugee and immediately called Priyanka and the magazine out for being negligent and insensitive.

Priyanka Chopra and Condé Nast Traveller are yet to respond to the outrage.

Oh, I'm sorry, I wasn't aware that being a refugee is a matter of choice...What were you thinking?! @CNTIndia @priyankachopra pic.twitter.com/WuyZv2iwp5

Appalling, dehumanising, privilege-strutting, racist message on Priyanka Chopra's tee on this mag cover. @LakshmiGandhi have you seen this? pic.twitter.com/KbizRQ0LL1

Since when did #PriyankaChopra Chopra, one of the world's highest paid TV actors, relate to a #refugee? @UNICEF pic.twitter.com/45e3vyQXek

@cntindia being a refugee is NOT a choice, it's a matter of survival. i was already disappointed for her comments abt feminism, now this -.-

How did @CNTIndia think this was appropriate? I need an explainer & @meanestindian's alt cover says it all: offensive. Wrong on all levels. https://t.co/QBvR7Xx0Xj

@CNTIndia @priyankachopra offensive t-shirt. With 65 million ppl displaced, highest no. since WWII, to pretend as if it's a choice. #nonPC

@CNTIndia @priyankachopra extremely insensitive in midst of biggest #refugeecrises. All other options listed are forced on people not chosen