Bollywood actors Priyanka Chopra and Ranveer Singh are known to have a close relationship with each other. They have starred in three films- Gunday, Dil Dhadakne Do and Bajirao Mastani. They continue to share an adorable bond and it was very evident recently during their video call.

Priyanka Chopra was live streaming on Instagram on International Women's Day from the sets of Quantico. During the call, she featured several of her co-stars from the sets of her show. But, one person in particular literally made Priyanka's day. It was none other than Ranveer Singh's midnight video call to Priyanka Chopra that everyone thoroughly enjoyed. They talked about Women's Day, Ranveer asked Priyanka to return to Hindi movies and wanted all the gossip. 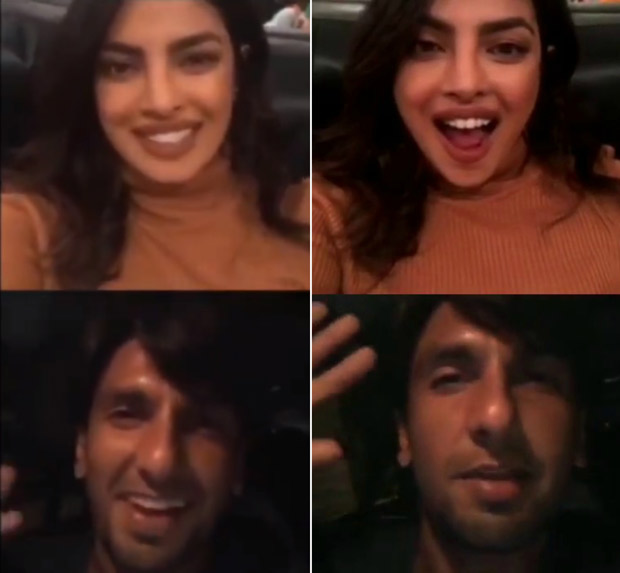 During the live stream, Ranveer responded to the chats when Priyanka decided to give him a video call. While she is shooting for Quantico, Ranveer was at shoot of Gully Boy in the middle of the night. They talked about Women's Day when Ranveer said, "We don't need a day. I have been raised by women - my naani, mummy and my sister. Whatever I am, I am because of them. They are like lionesses."

Ranveer further asked Priyanka to return to Hindi films. He said, “Jesus Christ PC, I am on shoot right now. I have to act and all yaar. But, we really miss you a lot ya. Come back to India and do some more Hindi movies. For God sake PC.” To that, she replied, “It’s almost happening Ranno, it’s almost happening.” He further said, “I want all the gup (gossip)!” Priyanka ended the funny conversation by saying, “I’ll give you all the gup when we are not talking to the whole world.”

Meanwhile, Ranveer Singh is busy shooting Zoya Akhtar's Gully Boy. The film is slated to release on Valentine’s Day, next year. The actor will also be seen in Rohit Shetty's Simmba and Kabir Khan's '83.

Priyanka Chopra, on the other hand, will return as agent Alex Parrish in the third season of Quantico. Besides this, she will also be seen in two films- A Kid Like Jake and Isn't It Romantic.

Thank you @RanveerOfficial for being such a rock star and your message on #InternationalWomensDay is so important and “Intelligent” lol❤ Full discussion on my Instagram story! pic.twitter.com/pJ6Yddiorh

Thank you @RanveerOfficial for being such a rock star and your message on #InternationalWomensDay is so important and “Intelligent” lol❤ Full discussion on my Instagram story! pic.twitter.com/pJ6Yddiorh