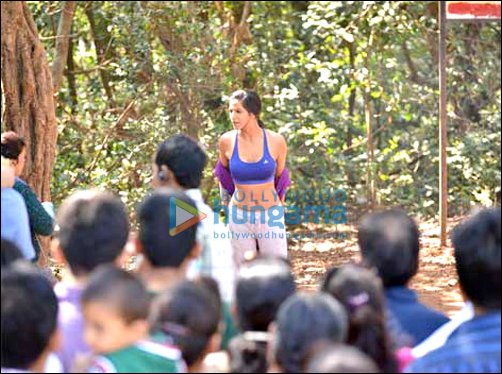 Poonam Pandey has been making headlines ever since her claim to strip for the Indian cricket team. The seductress, model turned actress Poonam is currently shooting for her debut film Nasha. Poonam who was recently in Wai shooting was quite literally mobbed by curious crowds wanting to get a glimpse of the actress.

It is said that the security personnel were unable to control the crowds that had been thronging the outdoor location shoot. The reason? Poonam true to her seductive identity appeared on sets and began to strip to a sports bra and tracks, albeit as the film's script demanded the same. However, the usual innocuous crowds were turned into a raging mob with her antics. Frankly, we aren't amazed that Poonam managed such a reaction, considering her past twitter exploits.


Nasha which is directed by Amit Saxena stars Poonam Pandey and is slated for release next year.