Ever since the start, there have been reports about the bungalow of Kangana Ranaut. The actress bought it in her hometown Manali. And since then, it has been a talk of the town. Courtesy, the plushness and location that has had onlookers staring at in awe. On the other hand, Kangana Ranaut has been managing all the supervision of her bungalow personally. She is leaving no stone unturned to take out time for this dear project and even followed traditions before getting it set. 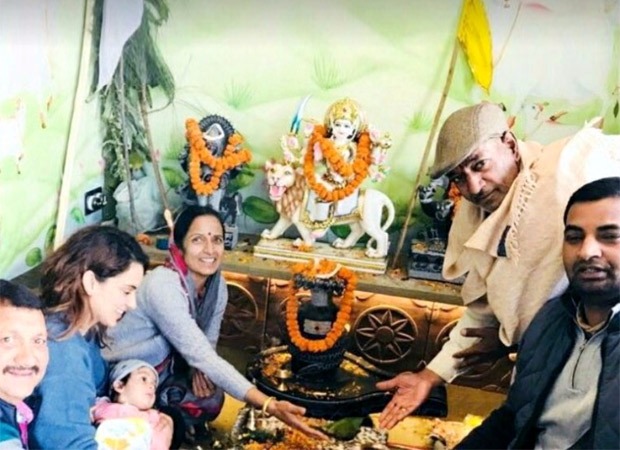 PICS: Kangana Ranaut does pre-housewarming rituals for her new bungalow

Kangana Ranaut along with her family planned a traditional graha pravesh Pooja for her new bungalow. Named Karthikey Niwas, the plush eight-bedroom bungalow is situated near the Karthikeya temple. Hence the actress decided to name it based on the positive energies of the lord. According to Hindu mythology, Karthikeya is the son of Lord Shiva and Goddess Parvati.

As for the housewarming rituals, the picture indicates that it was performed in a traditional manner. The family was seen taking blessings of Goddess Durga with a Shiv Ling enshrined right in the centre. The picture also featured Kangana holding her new born nephew, son of her sister Rangoli.

Kangana Ranaut is currently busy with several work commitments. The actress, it seems, decided to take a short break amidst it to attend the special Pooja. It is a tradition followed by Hindu households to retain peace and prosperity within one’s residence.

On the other hand, talking about films, Kangana Ranaut will next be seen in Manikarnika – The Queen of Jhansi. However, there have been many reports of the film being delayed owing to varied reasons. Besides this, she will star in the dark comedy alongside Rajkummar Rao in Mental Hai Kya. Apart from these, Kangana will also play an unconventional role of an 85-year-old woman in the forthcoming Shekhar Kapur film.