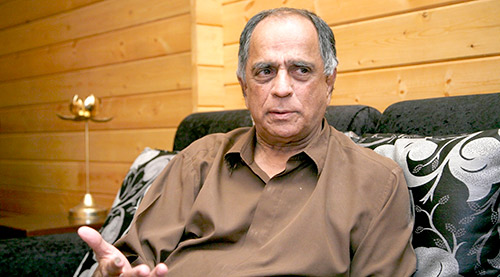 
Lashing out at what he calls the 'black-coffee brigade' of Bollywood, Nihalani says, "Do they even know what they are doing? All these so-called champions of Indian cinema who make films showing

Indians as gun-wielding criminalsâ€¦they first got recognized by the government for making films that portray India and Indians in a very poor light as a foul-mouthed violent abusive country. And now

when these ugly filmmakers are threatened with becoming bhoole bisre geet, when their self-declared claim to being the champions of Indian cinema are fading away, they're once again trying

to get renewed recognition by returning the recognition that they got from the government."


Nihalani finds the hypocrisy of the exercise nauseating. "The National award that Dibakar has returned for Khosla Ka Ghosla belongs to the producer of the film. The producer has gone on

record to state the award is not being returned by her. So basically Dibakar is protesting with a gesture over which he has no claim. By the way about the money that he got along with the award?

Why didn't he return it along with the trophy? Or if he has spent the money he could've at least attached an 'IOU' note on the trophy."


Nihalani not only accuses the 'Black Coffee Brigade' of using and misusing the government platform to stay in the news he also accuses them of misguiding the young. "These filmmakers who have not

had a single success in recent timesâ€¦in fact the only success Dibakar Bannerjee had was Khosla Ka Ghoslaâ€¦were misleading the students of the Film & Television Institute Of India (FTII).

Luckily the students saw reason and are back in their classes. All I want to tell this black-coffee brigade is please do not try to stay in the news by attacking the very establishment that made

you famous in the first place. The government should never honour these films that show India to the outside world in a poor light. But having received the honour these self-appointed radical

filmmakers have no right to dishonor the honours that they've received."