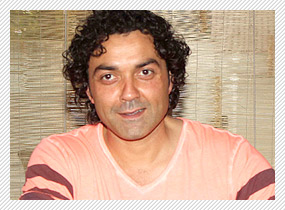 He was last seen in Players more than a year ago where he had an extended guest appearance. Prior to that he had an average runner in the form of Thank You which had followed Yamla Pagla Deewana which was a major success. Now more than two years after the film's release, Bobby Deol is back with the film's sequel which is expected to enjoy a good run for itself.

Guess there is some big time 'dhamaal' being planned for the audience with Deols coming together in Yamla Pagla Deewana 2.
Definitely. The idea was to create a script which had more comedy and more interesting situations when compared to the original. We took two years to get the script to get ready and today I am really excited. In fact ever since the first promo came out, the response has been quite positive. That is heartening indeed.

In fact Sangeeth Sivan tells me that everything is double of what we saw in Yamla Pagla Deewana. How true is that?
Yes, everything is double for sure (smiles). We have kept those characters which were loved by people though the story is entirely different. The situations are much funnier though and with some of the actors from the first part coming in together again, people would see a lot of double 'mazaa' and action.

Well, action can't be far away when Deols are around, isn't it?
(Laughs) My brother's image is so strong that you need to have action. So here he is fighting with hundreds of Ninjas and then seven-eight Sumo wrestlers as well. See, he is the only one who can get the hand pump out and look convincing.

Yamla Pagla Deewana had a 'desi' and rustic flavour to it. On the other hand this one seems to have a much more urban look and feel to it. How is the overall authenticity of the franchise maintained though?
The set up has changed and our writer Jasvinder Bath has really worked hard to come up with some great scenes and funny characters. In fact one such character is this monkey who is shown to be even more intelligent than the human beings. He is called Einstein in the film (smiles). He would be loved by not just the kids but an entire family. Overall too, the action is akin to that of Tom and Jerry. I love these cartoons and the action here conveys the same feeling.

From 'Tom and Jerry' to Salman Khan's Dabangg - Guess the inspirations are pretty varied in the film.
(Smiles) See, a movie's script works well when the characters are identifiable. When people love a particular star on screen, they do come home and enact the character played by him; they try to ape them. Same is the case with the part I am playing in the film. Since I am a huge fan of Salman, I am even fighting over his cut out. It works well in the film.

What also seems to be working well is your pairing with Neha Sharma. Was it an easy call to rope her in though?
No, it wasn't easy to get a leading lady for the film. We did a lot of screen tests as it was important that a girl was not just pretty but even look the character. She brought in both the traits and fitted in perfectly well as Suman who is carefree girl and a complete movie buff. As for the girl opposite bhaiyya, we wanted someone with an Anglo Indian look and this is where we found Kristina Akheeva who is from Australia. These choices worked for us since we were shooting continuously for three months and wanted everyone to be so attached to the film so that they don't worry about date issues. It was all worth it.

How worthy was stepping into Players though where you mainly had an extended guest appearance. In the hindsight, do you feel that it could have been avoided?
I believe what you are saying is right. See, I did it because I am close to Abbas bhai - Mastan bhai. I have a long standing relationship with them right from Soldier to Humraaz to Ajnabee and >Naqaab. When it comes to them, I can't say no. That's the reason why I did it.

You must have been glad to be coming with Sangeeth Sivan though after Ek - The Power of One.
Sangeeth has done a good job. Though he is a director from South India and to be showing people from Punjab may not have come to him naturally. But then we had a writer from North and then us Deols were anyways around. It turned out to be a group effort eventually.