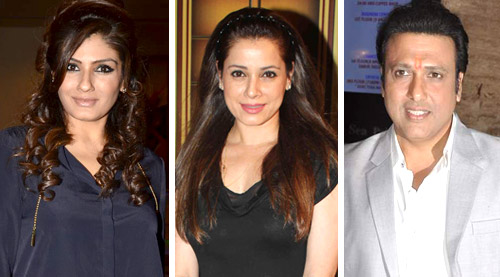 Raveena Tandon: "There cannot be another Govinda. I had the pleasure of doing six films with him. What a fantastic journey it has been for Govinda, and still a long way to go. He is one of the simplest and sweetest co-stars I've worked with, absolutely hassle-free not threatened by the presence of any co-star, no matter how formidable. And what a humongous talent! He is a rare combination of actor and dancer. He is in a unique slot where his name is carved in the history of cinema. Doing scenes and songs with him was a learning experience for me. We did a lot of popular songs and dances. But 'Ankhiyon se goli marey' and 'Kisi disco mein jaaye' were the most popular. You won't believe this. But both songs were shot and finished in one day. We shot from sunrise to sunset and we were done. This was a record of sorts at a time when each song took 4-5 days for the shoot. But that's Govinda's lightening speed on his feet. And I'd also be inspired into matching his steps. The dance steps were intricate and still there'd be no stress. We enjoyed our songs and dances. And there would be a healthy competition with each other about who did the steps better. We did Kisi disco in Mauritius and Ankhiyon se goli at Ramaji Rao studio in Hyderabad. We would do the antara and mukhda in one shot using 2-3 cameras from different angles. The choreographers for the two songs were Ganesh Acharya and Chinni Prakash. We all had a ball and it showed. I don't meet Govinda much these days. We are both busy with our lives. I heard his daughter is making her debut. I am sure she has inherited Govinda's zest for dancing and enjoying himself while acting."


Neelam Kothari: "We started our careers together in Ilzaam. And we went on to do several films together. Govinda is one of the kindest co-stars I've worked with. Also, one of the most versatile. Dancing with him was really easy. We hardly had to rehearse our steps. I wish him good health and happiness."


(I also asked Govinda's two other favourite co-stars Rani Mukerji and Karisma Kapoor to speak about him. They chose not to respond).