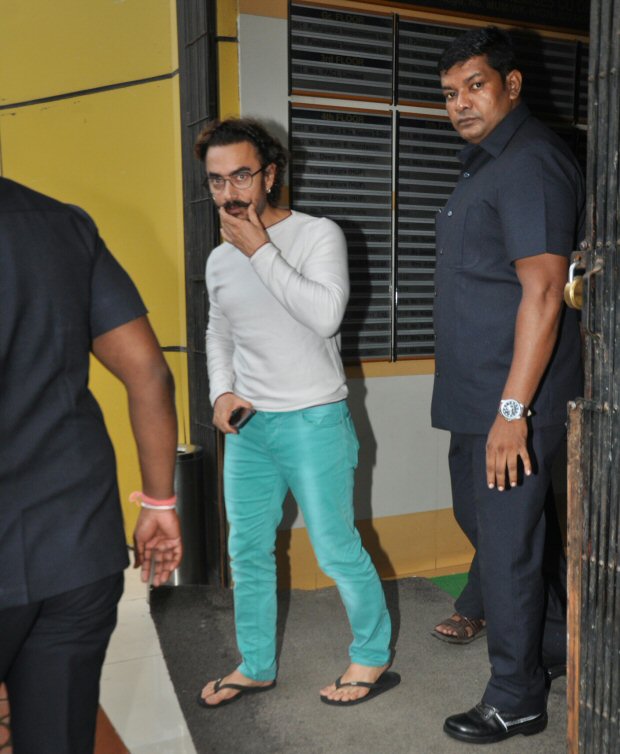 Aamir Khan stunned everyone when he announced in the first week of August that he and his wife have been diagnosed with swine flu. At that point, he was scheduled to attend a Water Cup event in Pune organized by Paani Foundation, run by him. Even Maharashtra’s chief minister Devendra Fadnavis graced the event. But Aamir Khan obviously couldn’t attend since the disease can spread to others if they come in contact with an affected person. Aamir Khan informed everyone about his condition through video conferencing. He also sent superstar Shah Rukh Khan in his place who readily agreed.

Post this event, Aamir Khan recuperated at home, as isolation is necessary for swine flu patients. But recently, he was spotted by the media at what seems to be his first appearance in public. The actor was clicked while leaving at a dubbing studio in Andheri, Mumbai. What stands out however is drop in Aamir Khan’s weight, probably due to being affected by swine flu. Interestingly, the nose ring and earrings, which are a part of his look in the upcoming film Thugs Of Hindostan, are still intact.

Aamir Khan is currently working on Thugs Of Hindostan along with Amitabh Bachchan, Katrina Kaif and Fatima Sana Shaikh. It is directed by Vijay Krishna Acharya and released on Diwali 2018. And this year on Diwali, Aamir Khan will unveil Secret Superstar, produced by him and which sees him in a supporting role.