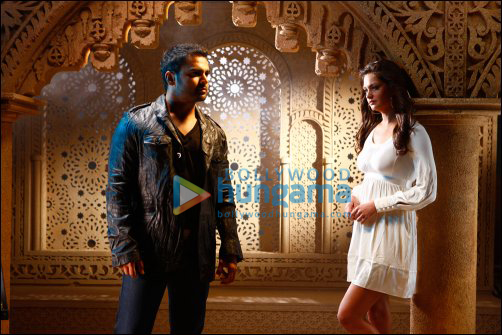 One wondered if the Playboy model Candice Boucher would be doing in Azaan what she's most comfortable with.

The film's leading man Sachiin Joshi laughed, "No I'm afraid if Indian audiences are looking forward to some serious skin-show they'd be disappointed. Candice plays an intensely romantic part. She's the emotional support for my character. Azaan is Candice's acting debut. But I've already done three Telugu films. So between the two of us, I'm the veteran actor."

Besides getting to see a side to Candice that we never imagined we will also get to hear her speak in Hindi.

Reveals Sachiin, "She does have a smattering of Hindi to speak. But she remains in character, namely a foreigner. In fact in Azaan we've gone completely by the script. Whenever we tried to break out of the script, tried to bring in a star like Sanjay Dutt, we failed. There is no attempt to spotlight me or Candice or for that matter Shakira's voice. They're there because they are needed."

In Azaan, Sachiin has done some of the most intricate action sequences. "We've the same team of action directors who worked with Shah Rukh Khan in Don 2 and Akshay Kumar in the reality show Khatron Ke Khiladi. I got a lot of cuts bruises and sprained limbs. But nothing major."