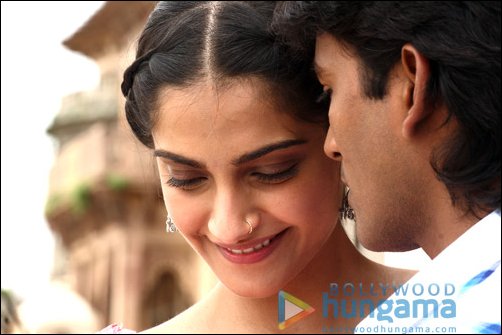 It was Juhi Chawla who once said to this writer, "I always thought no makeup meant you could use a bit of lipstick at least." And Govind Nihalani had a tough time convincing Kareena to simply wash her face, and face the camera in Dev.


For a mainstream actress, especially one as fashion-conscious as Sonam Kapoor, no makeup and no designer outfits and certainly no expensive accessories, are inconceivable. But that's exactly what Aanand L. Rai demanded-and eventually got-out of Sonam in Raanjhanaa.


It wasn't easy to convince Sonam. Crew members from Varanasi where the film was shot report 'substantial arguments' between Sonam and her director Aanand L. Rai over the question of a no-makeup look for the actress.


Says a crew member, "Aanandji was very clear that he wanted NO makeup at all. Sonam had her own interpretation of what 'no makeup meant'. There was much back-and-forth of opinion on this between them, since Sonam is a very fashion-conscious actress. She had never appeared without makeup on screen and to do so, she needed to build a new kind of self-confidence. To her credit, she did finally relent."


The other more insurmountable problem was regarding the difference in skin tone between the lead pair. To co-ordinate Sonam and Dhanush's looks to a point of compatible screen-presence was not easy.


Says director Aanand Rai, "No matter how different Sonam and Dhanush might be in personality, they finally had to look like two halves of one complete whole. If I may so, I've succeeded in making Sonam and Dhanush look like they were born to be together. As for Sonam's look, she wears no make-up in the film."