Tudum is back! Netflix has dropped the teaser of a bunch of upcoming Indian content in the past hour at the Tudum event, with Bollywood director Vasan Bala. Tudum ’22 went on one wild ride after another, from gritty noir in wealthy Bombay to a genre-bending dark comedy set in a small town to a whodunnit tale about a case of stolen jackfruit. Ready to hop in? Here are the teasers and details of each! 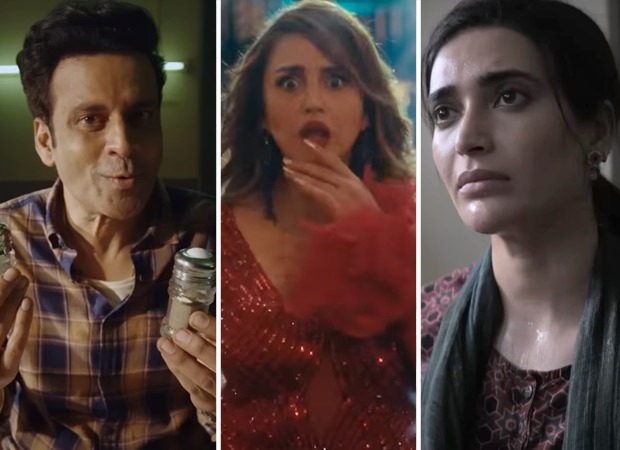 Khufiya
Khufiya is based on the novel 'Escape to Nowhere', inspired by real-life events and written by the ex-Chief of the Counter Espionage Unit of R&AW - Amar Bhushan. The story takes you on a journey of an R&AW operative-Krishna Mehra is assigned a crucial mission which leaves her juggling between her dual identity as a spy and a love. Tabu, Ali Fazal, Wamiqa Gabbi, and Ashish Vidyarthi star in this spy drama.

Kathal
Next up on the Tudum India show is a light-hearted Kathal. It’s lightly based on a true incident  — when a local politician’s prized jackfruits go missing, it turns into a bizarre case that falls into the lap of a young and earnest police officer, played by Sanya Malhotra. Kathal marks the directorial debut of Yashowardhan Mishra and is produced by Sikhya Entertainment and Balaji Telefilms.

Haunting, powerful and also rich with excellent music, the Tudum India debut of the Qala teaser is intriguing. Set in the 1930s and late 1940s, Qala is the story of the young eponymous playback singer. It’s about her tragic past and the ways in which it catches up with her, causing her to unravel at the peak of her hard-won success. Directed by Anvitaa Dutt and produced by Karnesh Ssharma, Qala stars Triptii Dimri, Swastika Mukherjee, Babil Khan and Amit Sial.

Chor Nikal Ke Bhaga starring Yami Gautam, Sunny Kaushal and Sharad Kelkar, directed by Ajay Singh and produced by Maddock Films is packed with adrenaline. It’s the story of a flight attendant and her business partner on a mission to steal diamonds and free themselves from the clutches of a loan shark. However, at 40,000 feet in the air, the heist goes horribly wrong and turns into a hostage situation.

The teaser gives audiences a glimpse of the gritty narrative. Gurnam, played by Randeep Hooda is forced to become an informant again to save the life of his brother, which forces him to come to terms with his dark past. Bringing together a powerful trio, CAT has been directed by Balwinder Singh Janjua, Rupinder Chahal, and Jimmy Singh and produced by Balwinder Singh Janjua and Panchali Chakraverty.

Produced by D2R films and directed by Raj & DK, Gun and Gulaabs is a genre-bending dark comedy set in a small town in India in the ’90s. Actor Dulquer Salmaan described what audiences will get from Guns & Gulaabs, including love, crime and a ton of mid-’90s nostalgia. Guns & Gulaabs also stars Rajkummar Rao, Adarsh Gourav, TJ Bhanu and Gulshan Devaiah.

Inspired by Jigna Vora’s book Behind The Bars In Byculla: My Days In Prison, this upcoming series traces the journey of Jagruti Pathak, an ambitious crime journalist whose world comes crashing down when she’s charged with the murder of a fellow journalist, and the truth is quietly buried as she waits out a trial. Directed by Hansal Mehta, Scoop is produced by Matchbox Shots, Sanjay Routray & Sarita Patil and stars  Karishma Tanna, Mohammad Zeeshan Ayyub, Harman Baweja, Deven Bhojani, Tannishtha Chatterjee, Tejasvini Kolhapure, Shikha Talsania, Tanmay Dhanania & Inayat Sood in key roles.

Directed by Abhishek Chaubey, Soup follows chef Swathi Shetty as she cooks up a master plan to replace her husband with her lover. But when a bumbling local inspector and a squad of villainous meddlers get involved, her plans could go cold before she knows it. Soup has been directed by Abhishek Chaubey and produced by Honey Trehan & Chetana Kowshik. The thriller stars Manoj Bajpayee, Konkona Sensharma, Nasser, and Sayaji Shinde.

Tudum India was hosted by comedian Zakir Khan and popular actor Prajakta Koli. Check out the first glimpse and promo of all the above titles here: