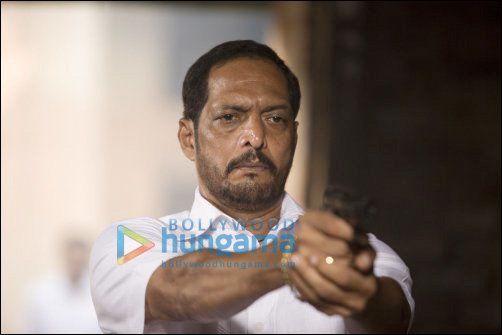 Nana Patekar has undergone extensive training for rifle shooting. He also owns his set of rifle's which he has been practicing every week over sometime now. Nana Patekar seems to excel at this sport. It started at as a hobby but Nana started to get too engaged in it and took it up very seriously. He has set a record of scoring 560/600 points which is way to excellent for this sport.

In his upcoming film Shagird, Nana Patekar plays the character of Hanumant Singh, an encounter specialist of the Delhi Police. Since there was action in the film, Nana had various shots in the film where he had to fire. But the best part is that none of the shots have been duplicated in the film. Nana was confident he would be able to do it by himself.

During one of the scenes while Nana Patekar was shooting at The India Gate, he had to fire at a moving target. Without any retakes Nana was bang on at his target. So impressed were the cops standing at that venue for security that they actually came up to Nana Patekar and complimented him. That's how they came to know he was a professional rifle shooter.

Tigmanshu Dhulia, the director, was amazed by his confidence level and allowed Nana Patekar to use his style of shooting. Everyone on the set was way too surprised to see that Nana Patekar is such a pro at the sport. There weren't any retakes when Nana was into the frame which also helped the shooting to complete on time.

The film is slated to release on May 13.