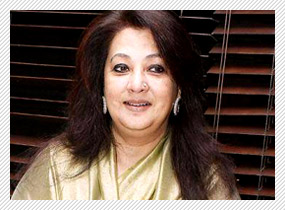 "She was so loved by everyone...It's hard to imagine she is gone. She was my entire universe.

Beautiful memories seem so painful at the moment. I think everyone's mom is very special. But

she was special to not just me but all of Bengal, and beyond. I can't think straight right

now...But yes, I'll tell you whatever I remember right now...What was she like? She was very

undemanding as a person. She was the closest to me. But she knew I had my life to lead and came

to terms with that. She liked being alone. But it's not that she didn't like meeting people. She

As a child I remember her always working. I was put in boarding school in Darjeeling and then in

England. It was a big joy and privilege for me to come back home for every holiday...thrice a

year to spend time with her. Every time I was home I realized how special she was. When I left

to go back to boarding school in Darjeeling and later in Surrey she'd cry more than I did. I was

very spoilt and pampered. Later when I was studying in Kolkata even when she was at work she

would ring up twice a day to find out about me, my meals etc...As I grew older I realized how

special she was. During my vacations she'd bring me down from boarding school in England to any

part of India. I remember my father driving me to the Taj hotel from the airport in Mumbai when

she was in the city shooting for Aandhi. I had to be content with those three annual

visits. After school during college I lived with her in Kolkata. We were very very close. When I

got married (quite late) and moved out, it must have been very difficult for her.

I looked after her when I was there. My going away must have been very hard for her. But she

never expressed her anguish. I have a very kind husband. Every morning I went to see my mother

and my husband never minded. My husband has always given me a lot of space.... My mother not

only dealt with the film industry on her own terms and also looked after the home and me. She

did everything that a man and a woman combined could do in a family. She was both father and

mother to me. We slept in the same room, ate together and did everything together. I remember

sipping tea and keeping an eye on me. I knew she was always there for me...I can feel her

her, although she wouldn't pick me up or drop me to school. She didn't have time for that. We

had a nanny for all that. Sometimes she would come to school to pick me up. People would not

accost her. They respected her privacy all her life in Kolkata.

When did I realize she was an iconic star? As a child I knew her as my mother at home and as the

actress in the studio. She started the star-system in Bengal. No one had an aura like hers. But

our most fun times were when I was in boarding school in England. Both my parents would come to

pick me up and we would drive to Scotland and other destinations. There was no question of her

privacy being violated during those precious family holidays in and around England. Even in

India everyone respected her need for privacy. But it's a myth that she didn't meet people. She

met everyone she had to and was extremely polite and easy-going in her social interaction. Of

course she had a fierce temper which my daughters and I have inherited. She was very choosy

about her friends and a stickler for punctuality. If anything didn't go well while shooting, my

mother would be extremely upset and would make no effort to hide it. That's because she was very

particular about the quality of her work.

cinema in the 1970s and 80s. Many of the directors she knew well and felt comfortable working

with, passed away. The scripts that were offered to her were awful. Uttam Kumar passed away and

she'd say, 'Whom am I going to work with?' Once she left acting she left it behind completely.

about how Gulzar Saab was doing. She was extremely fond of him. Otherwise she was totally out of

cinema both Bengali and Hindi. She let her stardom go quite easily.

But stardom never let go of her. I remember I was on a flight with Andhra Pradesh's eminent

producer D Rama Naidu. He said to me, 'Tell your mother I've a blank cheque waiting for your

mother whenever she decides to work with me.' And Salim Khan Saab told me she refused Yash

Chopra's Deewaar. After she opted out they changed the whole script. From Ma and Sons it

became just sons. ...I think she missed the company of like-minded people. She had me and her

aunts, sisters, nieces and very few friends. Initially my mom had 9 sisters. Now it's just 4 who

are alive. They were here after mom's passing away.

I am more outgoing as a person. But let me tell you, when she was working anyone

could approach her. She was there to help quietly. She looked after her makeup man's schooling.

She looked out for her entire staff, visited their homes if they were indisposed. Her charitable

work was not tom-tommed. She was a very generous soul. She had a great deal of self-respect

mixed with a whole lot of humility. But she never allowed outsiders to come close to her. One

thing she always taught me was to hold my head high.

She taught me so many values that I find so credible now. She followed them herself. When we are

younger we want to find out everything on our own. As we grow older we realize our parents were

right. She never put any restriction on the way I dressed or behaved. When I joined the Hindi

my mother always let us swim. And I'd move around the house wearing sun-suits. When I grew older

I wore mini-skirts. Not once did she comment on my clothes. She told me, 'You aren't comfortable

wearing a Saree? Don't worry about it unless we're going to a Shraddh or something.' It made no

difference to me if the Hindi film industry thought I was wild because I wore a swimming suit.

Now the Mumbai film industry has grown up a bit. During my days it was different. My behaviour

seemed unconventional in Mumbai. I'd keep shuttling between Mumbai and Kolkata trying to keep a

balance between my mother and husband in Kolkata and my career in Mumbai. I had this bunch of

friends over to Mumbai to keep me company.

I've been very lucky with my mother and my husband. After a point I stopped working in Mumbai

and moved back to Kolkata because I wanted to be with my mother. I felt she was lonely without

me. Now I am without her...For her final journey I dressed her up so beautifully. I made sure

her face was covered from public view. What a pity that was! Because to the end she was so

beautiful. She kept urging me to do a few more films and to write. I suppose now I will write

again. Maybe a coffee table book about my mother. You know, I promised her I'd never write about

her personal life. Keeping out her personal details it'd be very easy for me to write a coffee

table book on my mother. I feel my daughter Raima can take over my mother's histrionic legacy

forward and my daughter Riya would take forward my mother's spiritual legacy. During my mother's

final days Riya was holding her hand through the pain, giving her strength. My mother used to

say Riya had the makings of a great comic actress. Now she's gone leaving behind memories. They

would never fade. I am certain of that."