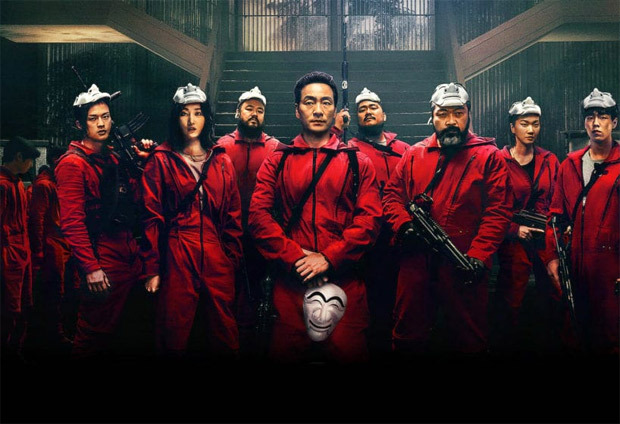 There are quite a few similarities between the Spanish original and Korean adaptation. The character names, situations, location, are similar. What sets the Korean version apart is the inclusion of Korean detailing such as the masks. While the Spanish version had Dali masks, the Korean one has Hahoe masks. These masks are traditional Korean masks worn during festivities and celebrations. Another thing that sets it apart is the North Korea and South Korea story. One can find the Spanish influence clearly throughout the show, but it is that Korean flavouring that makes it a whole new experience for users. From changing the professor's signature twitch, to adding a different story for the main cast (especially Park Hae Soo's Berlin), Money Heist Korea is an interesting watch.

Money Heist Korea: The Joint Economic Area features the story of the individuals who are North Koreans, currently staying in South Korea owing to the ongoing unification process of the two countries. The Professor and his team plan to raid the Mint and thus our story begins. The characters each have their own backstories which unfold as the story progresses. The narrative of the divide, and the stereotypes that follow are aptly shown in the series. Since the story is set a few years in the future, it shows a lot of 'what if's and their repercussions.

Netflix had earlier announced the casting of the Korean adaptation of its beloved Spanish Original Series La Casa De Papel. The Korean Original Series will feature an exciting cast from Korea’s top talents including Yoo Ji Tae who takes the role of Álvaro Morte's Professor and Kim Yunjin as Seon Woo Jin, an inspector at Task Force Team, who is set for the role of Itziar Ituño's Raquel. The other gang members include Jeon Jong Seo as Tokyo, Lee Won Jong as Moscow, Kim Ji Hun as Denver, Jang Yoon Ju as Nairobi, Park Jung-woo as Rio, Kim Ji Hun as Helsinki, Lee Kyu Ho as Oslo. The hostages will be played by Park Myung Hoon (Cho Youngmin) who will reportedly play the Korean counterpart of Arturo and Lee Joo Been (Youn Misun) who takes over the role of Mónica Gaztambide/Stockholm.

Money Heist Korea: The Joint Economic Area is a good remake as far as remakes go. The makers did not plainly copy paste from the original, they added a nice dash of their originality which makes the show a delightful watch. The series is a slow-burn K-drama with lesser flamboyance compared to the original counterpart but adds so much nuance and originality to the adaptation. Season 1 ended on a great cliffhanger leaving a lot to explore for the next season.