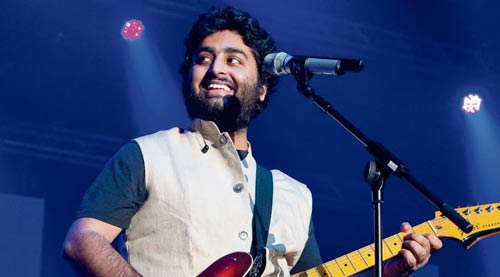 Arijit Singh, whose new song from Karan Johar's Ae Dil Hai Mushkil is breaking the internet, isn't content with just being a singer. "I have so many things that I want to do. I am directing a documentary on my guru Rajendra Prasad Hazari. I want to devote more time to doing riyaaz .I want to spend more time with my family. Eventually I want to direct a feature film as well," says the sensitive singer.

Arijit has always been careful about the songs he sings. He is now even more cautious. Apparently he insists on the lyricist's presence during every recording.

Concedes Arijit, "Yes, I do insist on the lyricist being present. Only the poet knows the true relevance of his words and how to express the feelings behind the words. So yes, normally I like to have the lyricist with me during recording. This is not always possible. But I still try to have him around."

Ask Arijit his favourite lyricists, and he rattles off, "Irshad Kaamil, Sayeed Qadri…I recently sang a song for Gulzar Saab…don't ask me for which film. I never ask the name of the film while recording a song. But my favourite lyricist is Amitabh Bhattacharya. We share an uncanny tuning. I can read between the lines of his lyrics. That's the place where the emotions are secreted."

When asked about his fellow-singers of whom Arijit thinks highly he shoots back, "There are so many who are vastly talented. But I really like Papon and Benny Dayal's voices and singing style. There's no dearth of talent in the music industry. We just need to dig deep enough into the repertoire to pull them out."

"I came from a place where being an actor…