Malaika Arora headed to Dharamshala to celebrate Diwali with Arjun Kapoor who is currently shooting for Bhoot Police. Malaika was accompanied by Kareena Kapoor Khan and Taimur who were visiting Saif Ali Khan who also stars in the film. Ever since they have reached Dharamshala, pictures and videos of the five have been doing the rounds on social media. 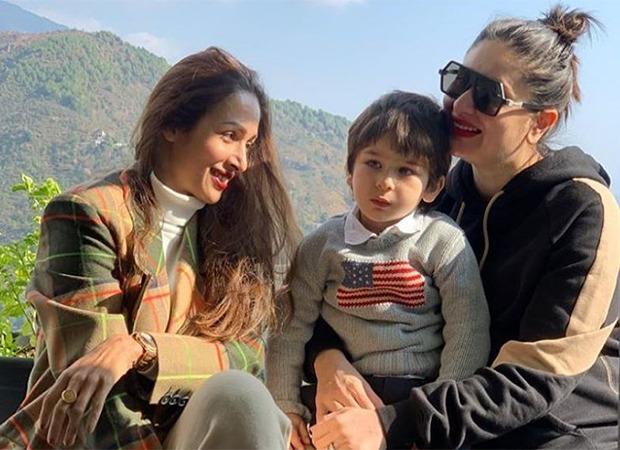 On Tuesday, Malaika took to her Instagram feed to share a sun kissed picture of her posing with bestie Kareena and Taimur. Taimur can be seen in a grey sweater sitting quietly on Kareena's lap. "Mountain bliss #timtim @kareenakapoorkhan #dharamshala," she captioned the picture.

Earlier a video of Kareena Kapoor Khan, Saif Ali Khan, Taimur, Arjun Kapoor, and Malaika Arora has gone viral on social media where they were seen taking a stroll on the streets of Dharamshala. In the video, we can see and hear Taimur saying 'no photo' loudly to people trying to click his pictures.

Arjun Kapoor, Saif Ali Khan, Yami Gautam and Jacqueline Fernandez have been shooting for Pavan Kripalani's Bhoot Police for quite some time now in the mountains.