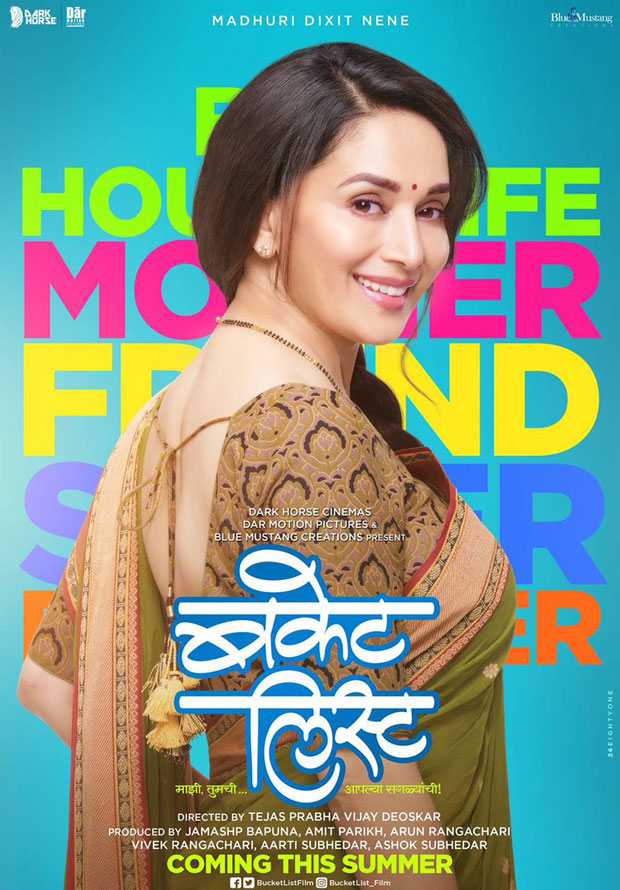 Although it will take some more time before we get a glimpse of Madhuri Dixit on the big screen in terms of Bollywood films, her fans can rejoice as the actress will also venture into Marathi films. While she is fondly known as the ‘Marathi mulgi’ since 90s, the actress will be debuting in the regional industry this year with the film Bucket List.

We had reported earlier about Madhuri Dixit is all set to make her acting debut with Bucket List. Now on the occasion of Makar Sankranti, the actress sprang a surprise for her fans on social media. Madhuri, who is quite active on these networking platforms, decided to treat her fans by releasing the first look poster of her film Bucket List on January 14. Unlike her glam looks in her Bollywood ventures, the actress features on this poster in a simple avatar. It seems like the actress has gone deglam for the film.

Madhuri Dixit posted about it on her Twitter page captioning the same in Marathi, “Bucket List.. Majhi tumchi, aaplya saglyanchi, tilgul gya aani god god bola" #SankrantiSurprise Bhetuya Lavkarach @tejasdeoskar @DARPictures @bluemustangcs @Darkhorsecine.” While she presented the poster as a sweet surprise along with tilgul [popular Makar Sankranti delicacy], it was also shared by Marathi actress Vandana Gupte too on her Twitter handle saying, “Our new film bearing the bright name of @MadhuriDixit on it's marquee! It's been an absolute delight! @sumrag @tejasdeoskar @renukash and @MadhuriDixit here's to many more!”

As for the film, Bucket List, we hear it is a slice of life drama revolving around the life of a woman whose journey of self-realization and self-discovery is presented with its own share of quirks. Madhuri Dixit had asserted that the film is a niche that will make a place in everyone’s heart with its inspiring storyline.

Directed by Tejas Prabha, Bucket List is written by Vijay Deoskar along with Devashree Shivadekar.