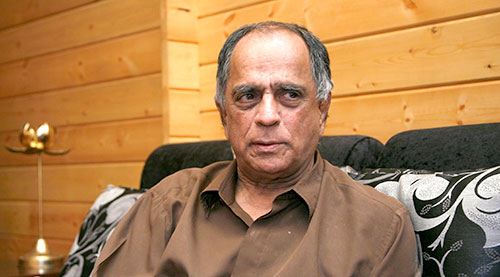 causing the producers heavy financial losses. In an exclusive interview with Subhash K Jha, Pahlaj Nihlani answers to the charges.

Your censor-board member Ashoke Pandit has tweeted that you withheld the certificate for the Bhatts' film Mr X illegally?

I did no such thing. In fact, we went out of the way to accommodate the screening and certification of Mr X out of turn. Secondly, I didn't know Mr. Pandit had studied the law so carefully.

I wish he would also study the guidelines and rules of the CBFC just as carefully.

So what is the truth about the certification of Mr X?

The truth is I have not personally seen Mr X. So where is the question of withholding the certificate? My board members watched the film out of turn on March 30. They advised some cuts. On

April 1, without receiving a show-case notice the producers have implemented the cuts, and got their clearance.

How did that happen?

I don't know. They've probably exercised some internal influence, made the cuts without a show-case notice, showed the cut version to two members of the CBFC and got their 'U/A' certificate. This

is against all rules and practice of certification.

Why was the certificate not given to the producers after the cuts?

Because our RO didn't come to office on April 1, as he was not well. I too was unwell. The file work was not complete. So I called our RO Mr. Vaidya to complete the paper work and then sent the

file to the CEO, Mr. Shravan Kumar since his signature was required. I went on April 4, to the CBFC office to sign the certificate although it was a holiday.

It is being said that you were under pressure from I&B ministry to clear Mr. X?

Let me make this clear. I am under no pressure from the Ministry for any of the decisions taken. Yes, I am in consultation with I&B ministry. But there is absolutely no political interference in

the decisions of the CBFC.

Mr. Ashoke Pandit alleges that the Bhatts lost Rs. 60 lakhs because of the delay in the issuing of the censor certificate?

The producers of Mr. X never bothered to inform me that their film was being delayed because of the certification. Also, I am a producer myself. I know the delivery of the print begins four

days before release. So where is the question of the Bhatts losing money because we delayed his film's certification? And where do I come into the picture?

You are in the picture as the chairperson of the CBFC?

But I haven't seen Mr. X nor have I stopped the certification. They are making presumptions and telling lies about my role in the film's certification. Let me repeat, on my initiative

without anyone's pressure, I've issued the certification. Why are producers seeking cheap publicity by maligning the CBFC?

Why are some members of the CBFC persistently attacking you?

I don't want to dignify their baseless allegations by responding. I am not accountable to them. I am answerable only to I&B ministry. My integrity is not negotiable. I repeat I haven't even seen

Mr X. Board members who viewed and certified the film would be better equipped to address the producers' grievances. Or better still let them file a RTI (Right To Information) against the

CBFC. We are willing to show all the papers regarding any film. My work methods are completely transparent. I am willing to answer any allegation blow by blow.