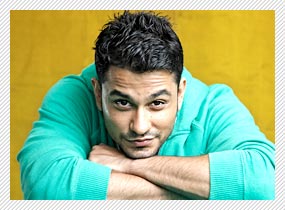 Things are looking up for Kunal Khemu. With his new film being very well-received by critics and his performance coming in for special praise, Kunal feels more confident in his private

Kunal Khemu on Soha and career ahead

He has lately moved in with his steady girlfriend Soha Ali Khan. But Kunal says they haven't really had the time to enjoy each other's company under the same roof. "We've both been

shooting out of Mumbai non-stop for our respective films. So we haven't really had a chance to feel like a live-in couple. Now we will. We decided to move into one place to save on

Kunal is aware that a lot of people would frown on the couple for "living-in sin". But he is unfazed. "We were bothered about what our parents would think. I come from a conservative

background. Initially my mother was shocked. But she trusts my judgment. So she just asked, 'Are you sure this is what you want to do?' My father was more liberal. I've always been

given the freedom to exercise my own options. As far as staying with Soha is concerned, we are not here to set an example for society. We are not endorsing live-in-relationships by

being in one ourselves."

Marriage is certainly not ruled out. "We were very open-minded on the topic. If we feel the need and if we want to start a family we will get married. Until then we're quite happy doing

what we think is right."

More than marriage, it's filmmaking that excites Kunal at this point of time. He has been hands-on in his new project Go Goa Gone not just writing the Hindi dialogues for the

directors Krishna DK and Raj Nidimoru but also serving as an uncredited chief assistant during the film's making.

Says Kunal, "Krishna and Raj can't speak a word of Hindi. They only converse in English and Telugu. So yeah, I did the Hindi dialogues. Even some of Saif's lines like 'I kill dead

people' were my idea. I've been on this project from the word Go. In fact I feel a sense of ownership over the film. Not too many believed one could pull off a zombie film in India. It isn't a

genre that's been done here before. So initially when Raj-Krishna and I thought of it, there were lots of question marks. Finally we had to cut a trailer to show to prospective producers."

Not only did Kunal help prepare the trailer he also got Saif Ali Khan's production house interested in it. "Initially when we showed Saif the concept, he was very kicked. He wanted to

come on board. We always had a star in mind to play the zombie killer. But all that about the zombie-slayer being blonde and a fake Russian from Delhi came in when Saif came on

Kunal refuses to get pissed off by insinuations that he got the role in Saif's production house because of his relationship with Soha. "Saif has never produced a film to accommodate his

own sister Soha. Why would he do it for me? And honestly if I had to ask Soha's family for a film, I'd go for a solo-hero not a 3-hero film."

Kunal being on board from the script stage had the choice of all three protagonists. "I chose to play Hardik because he is an anti-hero. Quite a cheesy character. I've so far played

mostly the good boy. I liked the challenge of playing a bad boy. I was relieved when Soha liked my character and performance and even agreed to make a guest appearance as my

love-interest in a fleeting flashback."

The initial plan was to get a 16-year old girl to play that role. But Kunal suggested Soha. "Why not? She's my real-life love-interest. And the audiences' connect was instant. Soha was

supportive from the start when most people thought we were crazy to make a zombie film. She was okay with it and continued giving her feedback as the film was made. She remained

on the project throughout and even agreed to make an appearance."

So galvanized is Kunal with the Go Goa Gone experience that he feels ready to take the plunge into direction. "Right from the start I've always been interested in filmmaking.

Go Goa Gone has given me the opportunity to take very active interest in the production."