Koffee With Karan season 6 is making our Sundays eventful and interesting. The blockbuster trio of Baahubali franchise – SS Rajamouli, Prabhas and Rana Daggubati – arrived on tonight's episode and they were definitely quite a delight to watch. The audience got to see a new side to the actors and director who are generally very introvert in real life especially SS Rajamouli and Prabhas. 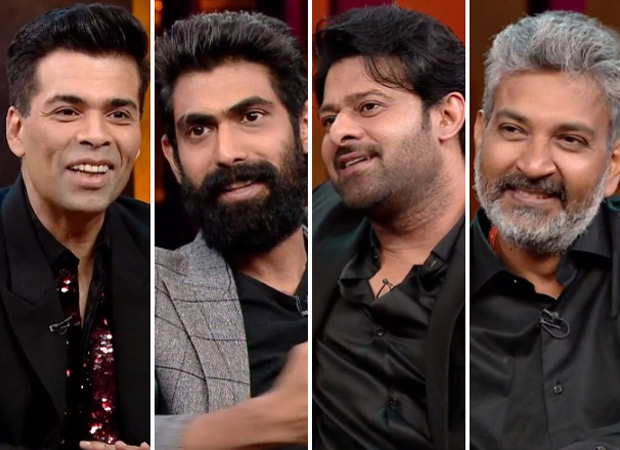 Here are the highlights from the episode:

Karan Johar asked about the relationship status of the two actors who receive so much female attention. Both of them said that they are single at this point. Prabhas finally answered the question of the century about the dating rumours with Anushka Shetty, known as Sweety Shetty which is also her real name, who has been his co-star in Baahubali. When asked whether he is dating her, he responded, “No.” He also said, “If any two people will work together for two years, of course, they will be linked. But I wasn't dating Anushka. Ask Raj (Rajamouli) if you want.” Rana also confirmed the two are not dating. Karan then said, “Because she was playing your wife, your mother in the films. It was complicated." Prabhas quipped, “Exactly, see, how can I date her?”

Rana Daggubati talked about his breaking up with actress Trisha Krishnan with whom he was in a relationship for a while. When Karan asked about his decade-long closeness to Trisha, Rana said, "She's been a friend of mine from a decade. We have been friends for very long and dated for a little time. But, I guess, things didn't work out."

In one of the segments, Rajamouli admitted that it would be Rana who probably will get married before Prabhas. He said, "Rana is so structured everything has to be broken into structures and pieces for him. His whole life is like 1-10 years, 10-15 years, 15-20 years. Marriage is an aspect, a box to be ticked. That will get ticked. I don't know whether that marriage will last.”

"I think Prabhas won't get married as he is lazy. Going through the entire process of finding the girl, doing the invitations, calling people and the ceremonies, it's too much. He is lazy to get married,” Rajamouli quipped.

Baahubali experience and the cliffhanger

Rajamouli revealed that while the film became huge phenomena, they did not expect such kind of response from the audience. While they knew how they wanted to end the first part, Baahubali - The Beginning, they were surprised to see the reactions across the globe with the cliffhanger, "Why did Kattappa Kill Baahubali?" Talking about the online memes and the reactions after the first movie, Rajamouli said "We didn't expect it (the hysteria). It was not intentional to shock the audience. It was just giving them something to hold on to, like a cliffhanger. I didn't expect it to catch on so much. After people started making memes and talking so much about it, then we thought let's make it a hook line for the second film. It was not thought of before. It came from the people and the audience."

While Rajamouli played well, he revealed that at one point some people thought he was Kattappa. Prabhas revealed that he had lied on the show while dodging some questions. Rana admitted that he has had friends with benefits.

Rana was the one first one to play the rapid fire round.  Rana, who has done a cameo in Yeh Jawaani Hai Deewani, stated he would love to work with Deepika Padukone. He even admitted that their Baahubali co-star Anushka Shetty is the sexiest actress in the Telegu industry. He even said that if he had to set up Prabhas with one Bollywood actress it would be Katrina Kaif. He said that he finds Ranbir Kapoor one of the finest actors in the industry.

In the rapid fire round, Karan asked Prabhas who is his preferred co-star amongst Tamannaah Bhatia, Anushka Shetty and Kajal Aggarwal and he said, “Anushka but that has nothing to do with the rumour. She has been my friend for the last 8 years.” He even revealed that he loves Sanjay Leela Bhansali and Rajkumar Hirani’s work. When he had to choose the best actress between Deepika Padukone and Alia Bhatt, he chose the latter.

While SS Rajamouli had pretty interesting answers, he took away the hamper. And he also won the game round. He had to call actors from South industry and say “Hey Karan, it’s me!” While Prabhas and Rana couldn’t get through anybody, Rajamouli called superstars Nandamuri Taraka Rama Rao Jr. aka NTR Jr and Ravi Teja.

All in all, the episode was pretty interesting as one finally got to see South actors making their debut on Koffee With Karan.