As this year’s theme is to bring interesting duos to the coffee couch, the latest celebrities to grace the Koffee With Karan are none other than PUNJABI duo, Diljit Dosanjh and Badshah. The rockstars are not only known for their singing and rapping but are also known for their incredible fashion statement. Beginning the episode with Karan Johar, the filmmaker revealed his obsession with airport looks and how much time he invests creating those looks with his stylist a day before. 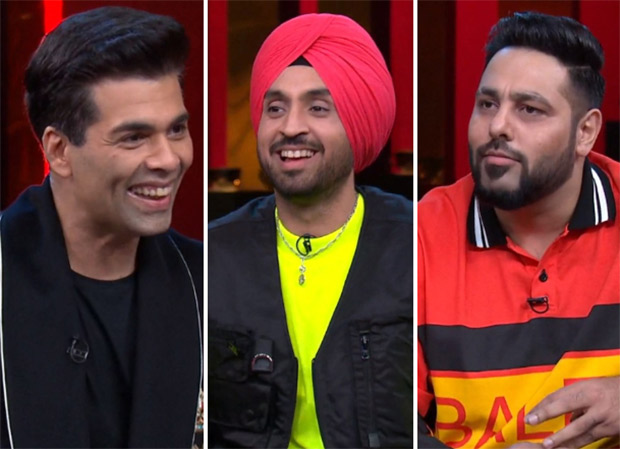 Here are some of the highlights from the episode:

1. Karan Johar talked about how Diljit Dosanjh and Badshah are not only obsessed with high-end luxurious fashion but also are aware of all the big brands. The stars began with how they got their start in Punjab before doing a fun segment where they guessed the brands that Karan actually owns.

2. Badshah revealed how he got his first break at a club in Delhi when he was merely 15 years old. But, the funny part was that he was booked for a show at a gay club.

3. Diljit Dosanjh finally talked about his obsession with Keeping Up With The Kardashians star and one of the youngest millionaire, Kylie Jenner. He has often left comments and tweets on her social media. He admitted that he genuinely likes her a lot.

4. Badshah revealed that he is a big fan of Shah Rukh Khan and one of the times, his gesture actually touched his heart. He recalled first time meeting SRK was at one of the awards show with Salman Khan. Both the superstars were sitting together when Badshah was invited. He was stunned to see how humble they were. He revealed that SRK even served him Biryani. Badshah said that he was surprised that someone of that stature was so humble.

5. Diljit Dosanjh too revealed that he is a huge fan of Salman Khan and that how his first meeting with the superstar was very heartwarming and he was left star struck.

6. The coffee shots round was changed to lassi shots round in which Diljit shunned his modesty and admitted that he has, in fact, made out in a car.

7. In the same round, Badshah also confessed he has had many relationships in the past but did not reveal how many.

8. The rapid fire round was pretty good. While Diljit Dosanjh kept it very clean and nice, Badshah kept it a little honest and even said that Kartik Aaryan is one of the most overrated actors. He said if he were single, he would take Kiara Advani on a date.

9. Diljit Dosanjh's rapid fire was pretty clean as he admitted he did not know all the names of the Kardarshian's except Kylie Jenner. He kept mum when asked who has been the most difficult star to work with.

All in all, it was a nice debut of the two rockstars on the coffee couch. Koffee With Karan's next episode will feature 2018 stars Ayushmann Khurrana and Vicky Kaushal.