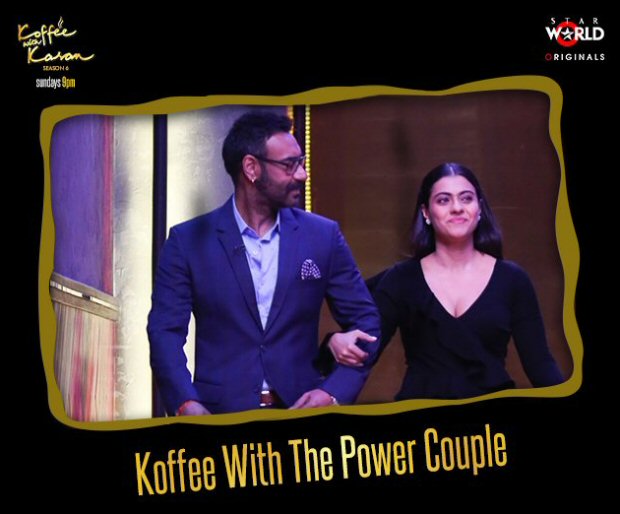 1. Reality of Ajay and Kajol's marriage

Everyone in the industry knows that Ajay Devgn is a recluse. He came out in open about his social anxiety, which Kajol calls laziness, to meet people or attend award shows. Kajol on the other hand fills in as a proxy and collects awards on his behalf because she enjoys looking at the industry as one big circus. Ajay is too happy with this arrangement.

2. Fight between KJo and Ajay-Kajol

Karan addressed his big fight with Kajol and apologised for writing about that in his biography. He said he was glad to have her back in life and also missed her during the time they didn't speak to each other. He also said sorry for looking through her at a show! He asked Ajay genuinely if they can become friends to which Kajol interjected and said she wants Karan only to be her friend. Karan also revealed that he has been trying to be Ajay's friend since last 20 years but no luck yet!

3. Kajol and Ajay as parents

Kajol pointed out that Ajay is infact a helicopter parent and is very hysterical when it comes to his kids. He waits for Nysa to come home and keeps a check on her. Kajol revealed that their child has made it impossible for them to snoop into her phone because of number of passwords on the device. The Dilwale star also revealed that both kids are extra attached to their father.

4. Dealing with affair rumours and insecurities

Karan called Kajol a ‘pati vrata’ and a prude because she is 100 percent commited to her husband. He also asked Ajay about his affair rumours and how Kajol handles them to which she said that they are very happy in their place and are not insecure. Moreover, Kajol claims that she is more out there and active than her husband so he should be insecure, not her! Ajay also cleared his record on the show about him not 'letting’ Kajol work with Shah Rukh Khan.

Ajay totally unleashed his brand of snarky humour on the hapless victims: Kajol and Karan! He dissed being a part of Karan Johar's Kaal which tanked at the box office and ridiculed Kajol on her 'old age’ on number of occasions! He even gave a tongue in cheek reply to Karan's rapid fire question: Male actors’ common lie...Ajay jokingly said, “That they love their wife.” Lastly, he forgot his own anniversary...making Kajol a little mad briefly.

The episode ended with Kajol winning Rapid Fire round hamper and Ajay winning the puzzle round.