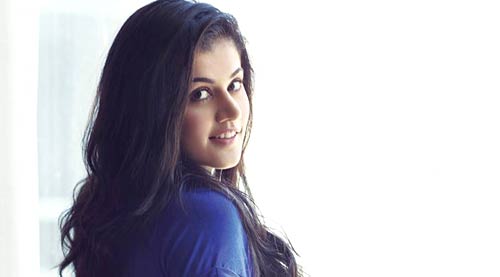 Last year it was Baby, this year it is Pink, next year it would be Naam Shabana and in the middle of this all, there would be at least three more films that Taapsee Pannu would be seen in. For someone who has been termed talented ever since she made her big screen debut down South, this young Punjabi woman has been making her presence felt in the industry. Now she is getting rewarded for that as well, especially in Bollywood, even as she has managed good hold in front of the towering presence of Amitabh Bachchan. In Shoojit Sircar's Pink, she is indeed a highlight as she comes across a mix of being vulnerable and feisty.

A powerful title - this is what manages an immediate connect between the film and the audience, isn't it?
When a film's title is good then your first impression is also good. When I did Baby then people were intrigued about what Neeraj Pandey had to offer. Now same is the case when Shoojit is making Pink. When the script came my way, the title was something else, not Pink. In fact when even I was told about it being changed to Pink, I too wondered what it would be about. Then we reasoned and it was explained that how Pink really fitted in well with the film's theme. See, Pink as a color is associated with something which is delicate and soft. That's the kind of conditioning it has done to our minds. You tend to believe that if it is about a woman then she has to be treated in a particular way. It is said that she should do things this way and not way. Ladki aisa kar sakti hai par waisa nahi. We are trying to break those norms here.

Correct, you are right. Till the time the promo came out, many including me felt that that Pink would be a cool, spunky and a teen feminine subject in the offering. However, the film's promo conveys quite clearly that this one is a hard hitting affair. How did you react to the script when it first came your way?
I knew about the subject even before reading it. In fact the makers wanted an opinion that whether the movie should be made or not. I was 100% sure that it had to be made. I knew that agar main nahi karoongi yeh movie then no one will else would do it. I truly threw all modesty out of the window (laughs). With Shoojit Sircar, I was all the more sure to be doing it. Moreover, to work with Mr. Amitabh Bachchan was a bonus. That said, regardless of him or not, I still wanted to do the film. The kind of love that I have of being a woman made me sure that I had to do Pink. I would any time stand for my right.

Going by the promo of the film, Pink seems to be a thrilling roller coaster ride.
For me who has done the film, I know exactly how the story goes from one side to another. I don't know how you have seen it as an audience. I have been hearing so many interpretations about the story. In fact some of these are laughable. Some even say that the entire narrative could be a figment of someone's imagination!

The film has Aniruddha Roy Chowdhury, who has made a couple of Bengali films before, making his debut as a Hindi film director. How did he inspire good enough confidence in you to take up the part? Did Shoojit Sircar's presence further result in decision making easier for you?
Shoojit was the in-between person between actors and the director. As for Aniruddha, we all trust him. He is such a direct person and has such a good grasp on the subject. As an actor I knew that I was in the right hands.

Cliched as it may sound but for you, Kirti Kulhari and newcomer Andrea Tariang, wasn't it an intimidating situation to be in front of Amitabh Bachchan? Especially in the fiery courtroom sequences?
Intimidating is a wrong word actually. As a matter of fact I was excited. So much so that during the early days, I took maximum number of retakes in a shot. I was so excited about working with him and it is only when the film progressed that I could work with him normally. Mr. Bachchan has so much amazing energy. Now as an actor, I derive a lot of energy from my co-actor. He is so good that when I saw him perform, my performance went a few notches up too.

The scenes that you share with him are quite tough though with intense dramatic moments in there. How did you actually get it right in front of Amitabh Bachchan so that you could concentrate entirely on your characterization, instead of being enamoured/ conscious by his presence?
See, sometimes you do get carried away, especially when a legend like him appreciates you. I actually became this fan girl at times. So when he said a few good words to me, I was excited and started jumping around. In fact I remember how I used to say some really stupid things after such moments and none of my words made any sense. You have to still get out of it though otherwise you won't be able to work well. Nonetheless, it is that little magical moment in there which is memorable for a lifetime.