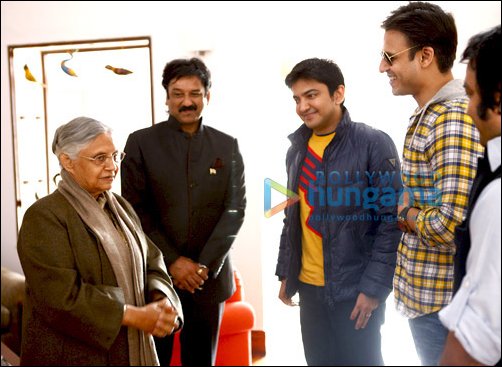 Amit Chandrra's Kismat Luv Paisa Dilli (KLPD) is currently being shot in Delhi. The crew landed in the capital on Sunday and has started shooting extensively across various parts of the city. KLPD, co-produced by Krishan Chaudhery, shows all aspects of Delhi from the food to the clothes, from the people to the picturesque locations and monuments in the city. It also promotes Delhi culture.

Therefore, when the Chief Minister of Delhi, Mrs Sheila Dixit met Amit Chandrra, the producer and Vivek Oberoi for morning tea at her residence on Tuesday morning, they all had much to discuss and talk about. Mrs. Dixit had heard a lot of positive things about the film and wanted to extend her complete support to the team and encourage them. She was glad to know that Amit is a Delhi boy and had moved onto becoming a successful filmmaker in Mumbai after finishing his studies in Delhi.

Since Delhi is a character in itself in KLPD, Mrs.Dixit was happy to hear more about the film from Amit and Vivek and told them that she would like for her team to extend full co-operation to make the process of shoot in Delhi very smooth. On contacting, Amit Chandrra said, "It was an absolute honour to meet Mrs. Sheila Dixit and we would like to thank her for hosting us so graciously. Her support is only going to help make this film better. Delhi is a beautiful city and I am glad that our script permits us to be here and show this lovely city and its culture on celluloid."

BTS to perform new song from Map Of The Soul…