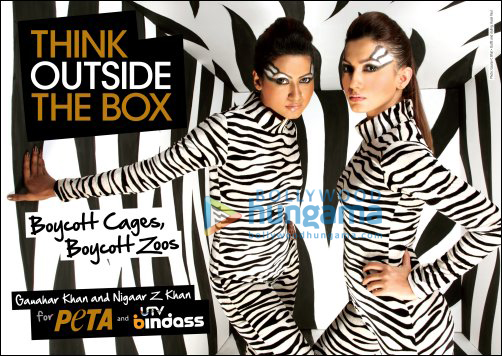 Whether they're modelling, acting, or appearing in the UTV Bindass reality show The Khan Sisters, Gauahar and Nigaar Khan choose to

entertain the public. However, this choice is not offered to the thousands of animals used as attractions in zoos. That's why the two sisters have teamed up

zebra-striped box above the words "Think Outside the Box: Boycott Cages, Boycott Zoos". The ad, which will be featured in the January 28 episode of The Khan

"You don't learn anything from looking at a sad animal locked up in a zoo", says Gauahar. "If you want to learn about animals, view them in their natural

habitats - visit a nature preserve, or watch a video or read a magazine about them. Don't support the keeping of animals in unnatural confinement."

protecting the animals' natural habitats or on creating reserves and national parks where they can live in peace."

Shehnaaz Gill gets insulted by Sidharth…