It was a night to remember on Saturday when some of the finest stars from the Indian industry and abroad came together to make the OnePlus Music Festival special. One of the festival’s most awaited superstar, Katy Perry arrived in Mumbai earlier this week in her signature style, giving audiences a taste of what to expect at her first-ever performance in the city. She along with British pop star Dua Lipa enthralled the audience with their breathtaking performances. While Katy Perry headlined the festival, she was joined by a brilliant lineup including Dua Lipa, Amit Trivedi, Ritviz, The Local Train and AsWeKeepSearching. 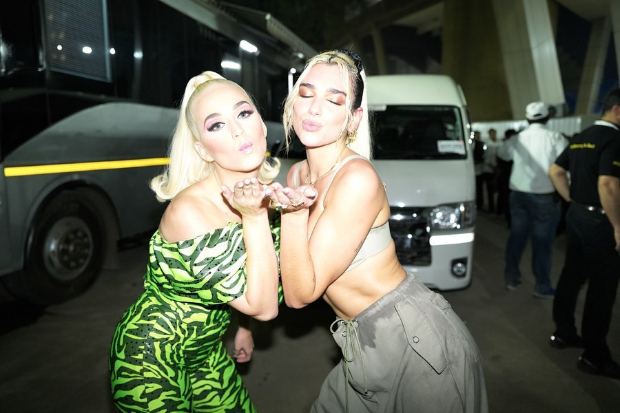 Music composer and singer Amit Trivedi was also one of the major acts at the festival. The musician is known for his amazing live vocals and performances. He started his set with 'O Pardesi' and ended his set with 'Emotional Atyachaar'. Not only did he sing songs, but he also gave his backup vocalists an opportunity to sing individual songs as the audience sang along with them. The songs included 'Ik Kudi', 'Fitoor', 'Dariya', 'London Thumakda', 'Love You Zindagi' among other hits.

Then, came British pop star Dua Lipa on stage who made her first performance in India a memorable one. She was one of the anticipated acts of the night and she did not disappoint at all. Dressed in a turquoise co-ord set, she began her set with her classic 'Blow Your Mind'. This was followed by all her hits including 'Scared To Be Lonely', 'One Kiss', 'IDGAF', 'Don’t Start Now', 'Hotter Than Hell', 'Be The One'. The last song was the most awaited one and it was 'New Rules'. But, she returned on set stating she had more time left. So, she sang the acoustic version of 'Thinking ‘Bout You'.

16 NOV 19 - Outrageously sweaty show! Mumbai you definitely brought the heat ???????? loved performing for you tonight alongside @katyperry who had me fizzing with excitement front stage during her set as it took me back to 15 year old me at my first Katy Perry show! Still just the same!! LOVE ???????????? // shot by @pixielevinson

The biggest act of the night was California girl Katy Perry who proved once again why she is one of the most successful artist in the world. As always, her stage had elaborate setting including inflatable props of a doll head, a huge rainbow and an arm. She started with 'Chained To The Rhythm' and followed by her hit track 'Bon Appetit' 'Wide Awake', 'California Girls', 'Dark Horse', 'I Kissed A Girl', 'Teenage Dream', Swish Swish', 'This Is How We Do', 'Never Really Over', 'Last Friday Night', 'ET and 'Hot N Cold' She dedicated the song to the audience - 'One of the Boyz' and another one to Dua Lipa - 'One That Got Away'. She also did her first stage performance of her latest single 'Harleys In Hawai'. She ended her grand set with two of her most successful songs of all time - 'Roar' and 'Firework'.

Do you ship?! ???? KaDua or KaLipa? ok but seriously such a FAB night in Mumbai for #oneplusmusicfestival with qt @dualipa thanks to all that braved the traffic and this heat you are the REAL ones ????

ALSO READ: Katy Perry is delighted to be back in India