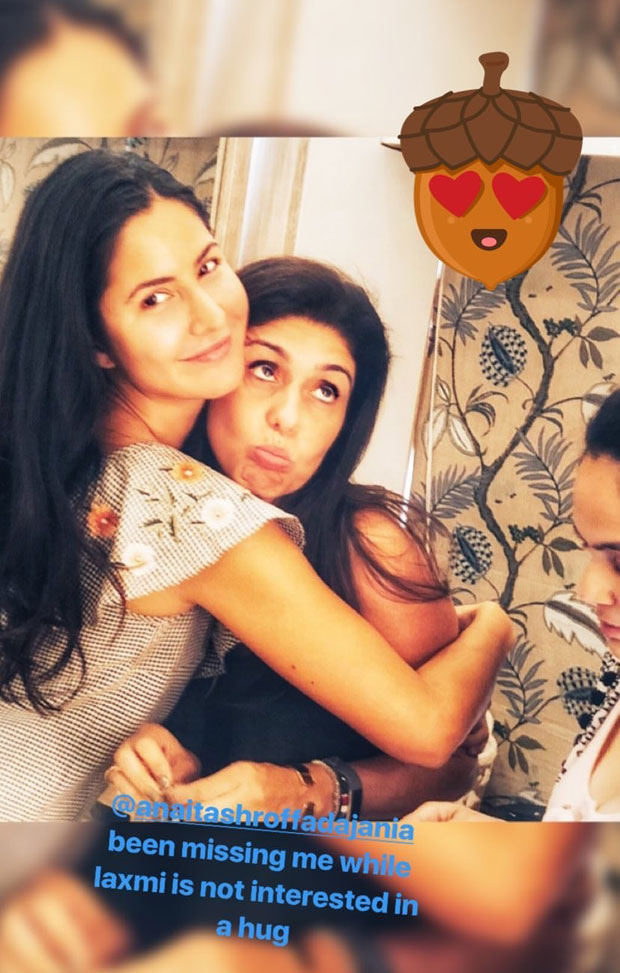 Katrina Kaif seems to be in love with Instagram and often keeps giving her fans a sneak peek into all the on the sets fun as well as bonding time with friends. The actress, who also shares a great camaraderie with stylist Anaita Shroff Adajania [wife of filmmaker Homi Adajania] recently, shared an adorable picture with her.

Katrina Kaif shared this picture of her giving a warm hug to her friend and stylist Anaita as one of her Instagram stories. Whilst mentioning details in her caption, the actress also spoke about a certain Laxmi, probably referring to co-stylist Lakshmi Lehr who too has worked with the actress and Anaita on several photoshoots including recent ones. What is also interesting in the picture is the deglam look we got to see of Kaif who seems to be perfectly comfortable posing in an avatar devoid of make-up.

As for her films, Katrina Kaif is all set to feature opposite Salman Khan as the Indo-Pak spies crack yet another mission in Tiger Zinda Hai. The actress will also be playing a prominent role in Aanand L. Rai’s next featuring Shah Rukh Khan and Anushka Sharma. She will also star with Aamir Khan and Amitabh Bachchan in YRF’s Thugs of Hindostan.