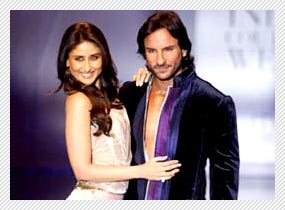 Kareena and Saif, a couple destined for each other and just like all those fairy tale movies with a happy ending, even their love story culminated in a successful marriage. Kareena reveals her secrets for a long-lasting relationship in her first book 'The Style Diary Of A Bollywood Diva'

Kareena Kapoor's relationship with Saif Ali Khan before Tashan was not even of friends, even though he had been Lolo's aka Karishma Kapoor's co-star earlier. What drew Bebo instantly closer to the 'Prince of Pataudi' was his sense of humor and love for adventure. She also claims 'he's the most stylish man she ever met'. "Saif flirts shamelessly but uniquely," says Kareena. His first compliment to Kareena when they were shooting for Tashan was "I like the color of your car, it isn't very girlie" (it was gunmetal). A few days later after a motorcycle ride through the countryside, both the larger-than-life personalities realized they had more in common than they thought. And thus 'Saifeena' was born with the duo spending all their time together, either shopping for wooden boxes that Saif is obsessed with or hunting for Chinese food that Kareena craves.

Like all the other couples out there, Kareena and Saif too had to make sacrifices and adjust to each other, as well to their respective families. And their luck had it when both the families supported them, which was a crucial part. Although Kareena is a fan of chewing gums, Saif detests it. Once during a car ride when Saif annoyingly told Bebo to 'stop chewing gum or he'd jump off the car' it seemed like a joke to her but finding out he was serious was a real spoiler, so now she doesn't chew gum anymore.

What really makes their whole relationship work is the fact that they have learnt a lot from each other. If Saif has learnt to be enthusiastic about life and not worry about small things that could go wrong from Kareena, then Bebo knows how to let her guard down and be more trusting as well as patient with her husband's help. The actress recalls an incident when she once got upset as Saif didn't give her a call for several hours; but she swore never to overreact when she found out he was actually planning a surprise birthday party for her.

According to Kareena, the necessities to a perfect relationship are trust, couple-time, alone -time, surprises, seduction and less of ego. While there are ample of things more common in them, holidaying in Gstaad is one of them. One of the reasons they clicked as a couple was due to their love for travelling. The heart-throbbing queen has also set few non-negotiable grooming demands for Saif, starting from a trim beard, clean feet and no ear or nose hair to fresh cologne exam.

If there's one way Kareena knows how to keep her hubby happy, than it's by buying gifts for him all the time rather than finding a special occasion to splurge on something expensive. Even though she's not really particular about gifts and can do with diamonds for all events, Saif's a tad complicated and expensive. He likes his stuff to be unique, custom-made and limited-edition. He's so particular about his shoes, suits and accessories that sometimes it even surprises Kareena.