In the upcoming episode of Sony Entertainment Television’s comedy show, The Kapil Sharma Show, ace choreographer, director, and producer Farah Khan will be seen talking to Kapil about her journey in the industry, her life as a mother to triplets and her role as a wife of Shirish Kunder. In other conversations, Kapil will be seen putting his comedy hat on and make the weekend episode viewing with industry’s witty queen Farah Khan an entertaining watch.  While talking to Farah about her directorial journey, a very interesting fact was revealed about her first movie, Main Hoon Na. She went on to say that Suniel Shetty a.k.a, ‘Anna’ was actually the last actor who was locked to play the role of a villain in the movie. She had initially approached acclaimed actors from Indian cinema such as Naseeruddin Shah, Nana Patekar and Kamal Haasan to play the part. 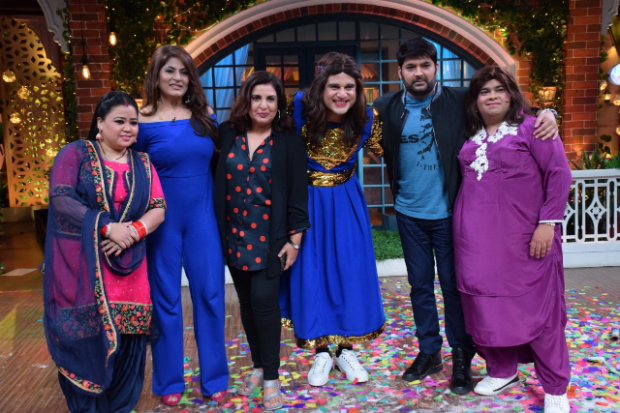 A source close to the show confirms, “When Kapil Sharma asked Farah to elaborate her reason behind casting Suniel Shetty she said that her first choice was always Naseeruddin Shah but he declined the role stating that he couldn’t stick around for so many days. Hence, she cast him as Shah Rukh Khan’s father and then, she went and meet Kamal Haasan Sir in Chennai and stayed there for a day. She also narrated the script to Kamal Haasan who eventually declined. Not stopping at that, she approached Nana Patekar who liked the script but made a few edits in the script followed by writing a few more scenes which Farah Khan happily included in the movie. But then again, Nana too declined the role. Not the one to give up, she then went to Suniel Shetty, thinking that taking an actor in villain’s role would be new and a person like him will do justice to the character. Finally, Suniel who agreed to do the film by only listening to the first half of the film was finally cast as the villain. His role in the movie was well appreciated to an effect that he was flooded with offers to play a villain in other movies.”

Further, in the show, Farah will also talk about her equation with Bollywood’s, King Khan Shah Rukh Khan and how their friendship journey started during the outdoor shoot of, Kabhi Haan Kabhi Naa.