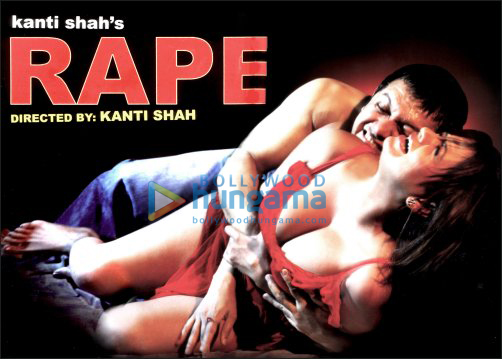 It's said that 'Reel life always imitates real life'. If you are one of those who disagree with this, we are sure that filmmaker Kanti Shah will change your belief. For starters, Kanti Shah is the 'almost King' of C-grade films. Testimonials to his filmmaking reflect in his 'creative' titles like Free Entry, Duplicate Sholay, Kabhi Kranti Kabhi Jung ('K3J'), Marna Zaroori Hai and the last released Lage Raho Partner.

The goods news for all his fans is that this man is back and how! He has announced a very 'topical' film called Rape. Yes, you heard the name right. Going by the 'USP' of this filmmaker, we are sure that the 'topicality' of this film has anything and everything related to the recent rape controversy surrounding Shiney Ahuja. When Bollywood Hungama spoke to Kanti regarding Rape, he was initially reluctant to 'reveal' anything about the plot reasoning that it was a very tight-bound script and has been strictly kept under the wraps. It took a little probing from our end to get the following 'revelation' from Kanti. He said "Yes, my latest film Rape has been heavily inspired by the Shiney Ahuja case. While the hero's name is Imran, the heroine is Sapna and both are newcomers. Mark my words; they are definitely the faces to watch out for! My film has got 5 songs in all with its lilting music composed by the very talented Sameer Sen (of Dilip Sen - Sameer Sen). Of these 5 songs, two are super duper item numbers!"

A little more probing from our end actually got us to the 'Plot' of the film. Shah added, "All that I can tell you is that since the film is called Rape, it will obviously deal with the sensitive subject of rape. And it has the hero raping the heroine. That's all. I think I have told you enough. Beyond this, I cannot tell even a word more. But, do watch out for this film soon! It's bound to rock the nation."

Well, for those who are waiting with bated breath for Kanti Shah's Rape, here's another piece of information. There's yet another film that has been 'inspired' by the Shiney Ahuja case. It's called Chamak, The Shiny with actors Hiten and Divya playing the lead.

After all this, one wonders as to what will be Shiney's reaction to the saying 'Imitation is the best form of flattery'.