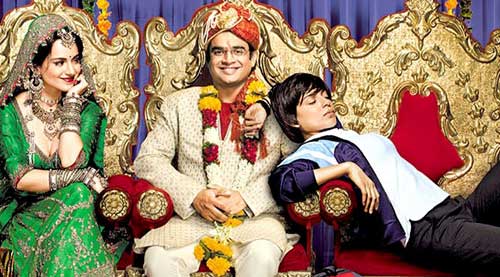 Second half of the year has begun and the first major milestone for Bollywood is the 150 crore home run that Tanu Weds Manu Returns has hit. With this, the film has also entered Top-10 list of all time biggest money-spinners. Most notably, it is the only film in the list which doesn't feature Aamir Khan, Salman Khan, Shahrukh Khan or Hrithik Roshan. While it is a remarkable feat indeed for its lead couple Madhavan and Kangna Ranaut, for producers Eros, it is their biggest ever till date.

As for director Aanand L. Rai, he has made a sprint from Tanu Weds Manu to Tanu Manu Returns in four years flat by collecting over four times. He has made it to the big league for sure by delivering a Rs. 150 crore success. However, he is sure that these numbers won't be looming large over his head before he embarks on his next.

"At the end of the day, how many extra bedrooms do you need at your home? From two, you move to a three bedroom flat. From three to four. From four to five. But for how long? What has that to do with the creativity you want to bring in your films," wonders Aanand, "Yes, a good life is important. I am enjoying that for sure. But then I have enjoyed that in the past as well."

The madness that he has evidenced around him in the last five weeks has not impacted him as yet at least.

"As a matter of fact, the world around me is running very fast. However, I want to slow down, relax, think and then move on to my next," says Aanand, when questioned around the multiple offers, deals and collaborations that have come his way ever since Tanu Weds Manu Returns was declared as a blockbuster.

While Kangna has moved on to Katti Batti and is in the middle of picking on some interesting films. Madhavan is abroad and would return to begin strategizing for his next, Sala Khadoos. As for Eros, which is on a dream run with the hat-trick of successes (Badlapur, NH 10, Tanu Weds Manu Returns), there is a biggie waiting to be grabbed with both hands, Bajrangi Bhaijaan. Meanwhile, Aanand - in his own words - is at peace with himself.

"Numbers are good, collections do help," agrees Aanand, "The biggest win though for me is audience's trust that I have managed to gain over the years. A figure like Rs. 150 crore comes with a huge responsibility. I know that expectations have only gone further up with the film. I need to live up to that. However before that, I need to find my inner voice on what I need to make next."