Actress Kangana Ranaut is very fond of her nephew Prithivi and shares a close bond with him. She often uploads a picture on social media with him and sister Rangoli wherein they can be seen spending time together. The actress has taken along her nephew and sister Rangoli for her shoot of Dhaakad in Budapest and after wrapping up the film she is seen chilling with her nephew in a water park in Budapest. 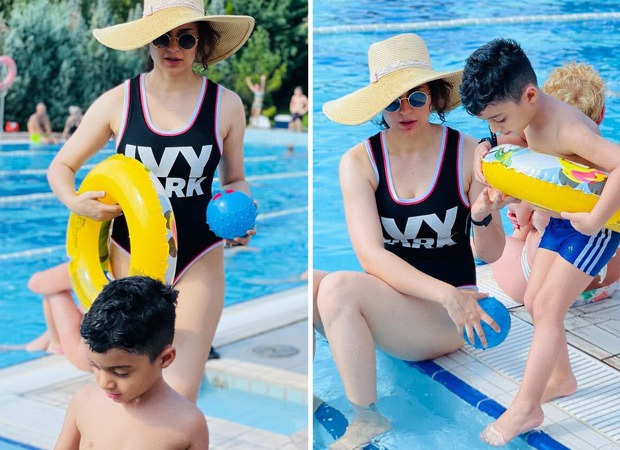 The Dhaakad star took to her social media and gave a sneak peek into their day at the water park. She captioned it as, "A day with my kiddie….. in a water park ha ha I am not a water person at all and he loves water but I enjoyed it may be because he was so thrilled to be there......I guess that’s what love is about". Kangana mentioned that he is not a water person but for the love of her nephew she decided to go with it just to make him happy.

The 34-year-old actress recently finished filming for the spy thriller Dhaakad and took to her Instagram page to thank the cast and crew of the movie for doing great work together as a team and giving memories for a lifetime. She also revealed that her character of Agent Agni will live with her beyond this film. Dhaakad is directed by Razneesh Ghai starring Kangana Ranaut, Arjun Rampal, and Divya Dutta. The National Film Awardee also has Thalaivi, Tejas and Manikarnika Returns: The Legend Of Didda in her pipeline.