John Cena has been busy promoting his new film Dolittle. The wrestler-turned-actor has time and again mentioned that he is a fan of the Korean band, BTS. Even the band members - RM, Jin, Suga, J-Hope, Jimin, Taehyung, and Jungkook - are aware of the fact that the WWE wrestler listens to their music. 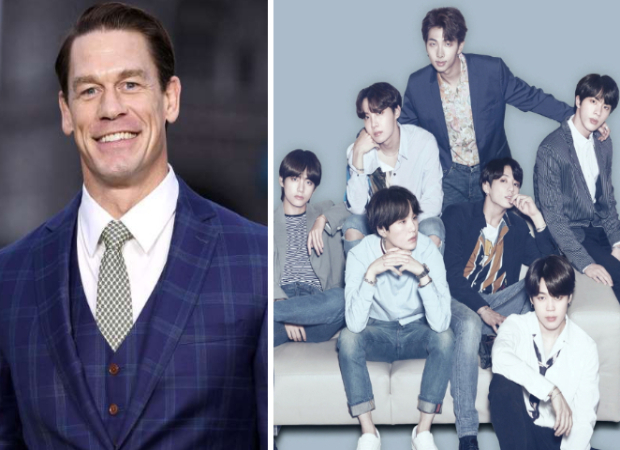 During the promotions of his film Dolittle, John Cena visited The Late Late Show where the host James Corden mentioned how January Jones had clicked a picture with BTS when they had visited the show but at the time, she wasn't aware of their popularity until she posted the photograph on Instagram. John Cena, who was also the guest on the show, quickly said that she was lucky to have a picture with them.

When James Corden mentioned that John Cena was a legit fan of BTS, he went onto explain how and why he became one. "So, I became interested about the fact that they are Korean pop band and they were the first Korean pop band to actually have connectivity throughout the world. They have fans throughout the world. So, being in live entertainment, I was like 'Wow! That's interesting. How do they do this?' Then, I began to listen to their music and listened to the message they send to their fans. It's about self-love, self-reflection and being confident in yourself even though you may be different. Not only it's the choreography, personalities and the whole entertainment that they put on which is spectacular, but young people are also listening to the music and they are sending a good message through their music. That's really cool. When you have popularity and you choose your voice for something good, I think that's a plus."

This isn't the first time, John Cena has spoken about the South Korean septet in the most heartwarming way whenever he has been asked about them. BTS' song 'Fire' was included in his film Playing With Fire.

thank you so much @JohnCena for being an amazing ambassador for army and spreading @BTS_twt's message of reflection and self love pic.twitter.com/AtcwXalaxi