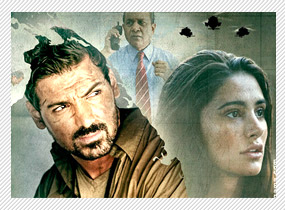 Knowing pretty well that it won't be possible to fight a war with a truly 'real' feel in India, John Abraham headed to Thailand and Malaysia in order to can some crucial war scenes for his Madras Cafe.

"Both John and director Shoojit Sircar were clear from Day One that everything about Madras Cafe had to be as authentic as it can be while maintaining cinematic appeal. Though there have been quite a few war movies made in India before, John wanted to take the genre to the next level. All this while there have been several claims being made around the film reaching out for Hollywood standards. One step in this direction was to shoot with real bullets so as to make the action sequences truly real," informs a source.

It was a given that this wouldn't have been possible in India. Hence it was pronto decided that Thailand and Malaysia would be the chosen countries for canning this 'filmy war'.

"Of course we had to take care that no untowardly incident happened," the source adds, "Needless to say, when you are shooting a war scene at such a large scale, there are many people involved. More than 1000 rounds were required to be fired and hence the entire area had to be cordoned off lest anyone comes in the firing range. Every bullet was accounted for and all safety precautions were taken to make sure that no one was hurt."

Considering the fact that John Abraham himself had a close shave with death a few months back during the shooting of Shootout At Wadala when a blank bullet fired by Anil Kapoor from a close range barely missed him, he too was cautious and extra precautions were taken.

Confirms John, "Yes, we did use real bullets for these war scenes. See, when you shoot with a blank bullet then you can make out that it is blank. It may not be as apparent to a regular viewer but then we wanted authenticity in every frame. We got the necessary permissions in Thailand and Malaysia to shoot there. As a matter of fact, in number of scenes we even have ex-soldiers fighting it out. We came as close to reality as a war can be."