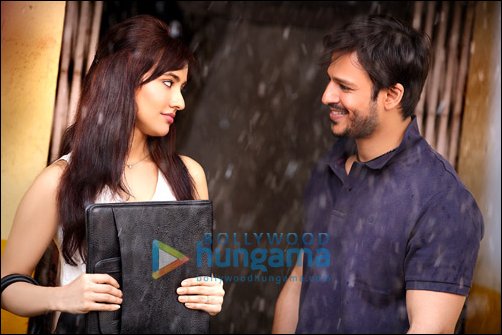 Says producer Kumar Taurani, "We are happy to announce that our next venture Jayanta Bhai Ki Luv Story will release in October this year. The shoots have been on

schedule and we are very excited with the way things are shaping up. We can't wait for the film to hit theatres".

Jayanta Bhai Ki Luv Story is a light-hearted comedy that follows a gangster's love story and marks the directorial debut of Vinnil Markan.

Talking about the film, director Vinnil says, "Jayanta Bhai Ki Luv Story is a film about how we fall in love unknowingly with people we least expect to. It isn't a

The makers are looking at completing the film by the end of July. "We finished our first schedule. Kotachiwadi was a beautiful setting and lent itself so perfectly to the scenes.

Both Vivek Oberoi and Neha Sharma were extremely supportive of the grueling schedule," adds Vinnil Markan.

Exclusive: Neha Sharma is looking for her…

Arjun Kapoor hints at the sequel of…