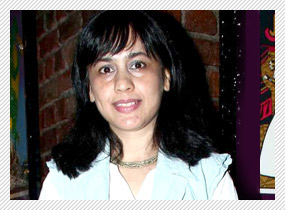 Tanushri Chattrji Bassu, ad filmmaker turned feature film director, is a bundle of nerves. Her directorial debut Purani Jeans is all set to arrive next Friday and anxiety is taking its toll. For someone who has enjoyed a fairly reasonable time in the world of showbiz, this seems rather uncharacteristic.

"Well, it's right that I started out quite a while ago. I have been directing advertisements since 1997. I use to initially direct for Prahlad Kakkar's production house (Genesis). From there I went on to setting up my own production house (TCB Productions). I have worked on biggest of brands like Pepsi, Maggi, Kit Kat, Nestle, Ponds etc. However, making a full length feature film has been one of its kind experiences," smiles Tanushri.

For her very first feature film where she managed to convince Eros (Manju Lulla) to step in as producer, Tanushri wanted to follow the feel good path.

"I wanted to make something that I am familiar with. Even though I like watching all kind of cinema, I love feel good films like The Notebook, Cinema Paradiso or When Harry Met Sally. These are the kind of films that give you a warm feeling when you leave the hall. This is the reason why I thought that for my very first film, why I don't explore this genre," she says.

She has set the film, which features Tanuj Virwani, Aditya Seal and Izabelle Leite as leads, in picturesque locations of Himachal Pradesh.

"I grew up in cantonment area as my father was in the army. Purani Jeans too has that kind of small town set up since I was inspired by my growing up years," she informs.

Though in her film Tanuj and Aditya play Kasauli Cowboys, female lead Izabelle Leite (who is Brazilian model turned actress) is presented as a Mumbai girl who steps into the town of Kasauli.

"Her character is possibly the most urban character in this setting," says Tanushri, "She plays the daughter of an IAS officer from Mumbai who comes to this small town. There are five boys who are part of Kasauli Cow Boys and then she comes and joins them. Her character is very extrovert. We wanted a very glamorous girl for this part and Izabelle was just the right girl to step in. In fact you should have seen the heads turn, both on and off the screen, when she walks into the frame or on location. She has that magnetic pull about her."

Now one waits to see if audience too reacts in the same manner when Purani Jeans hits the screens.