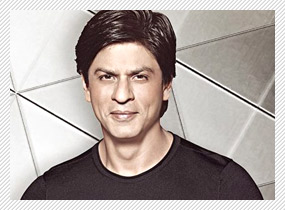 It's official! Chennai Express in the highest grossing Hindi movie. Add to

that, the actor's personal life that's almost single-handedly keeping the tabloids in the

business. What does that mean? It means that Shah Rukh Khan has mastered the art of mega

stardom. Over the course of the next one hour, Khan proves to be unfailingly gracious, good

humoured and game for all the questions, including those about his life in general. It's a

skilful summary of Shah Rukh's two-decade career. As an actor, he's blessed with an unusual

hands over the cliff, from a snow peaked mountain or from a college campus, the man's got the

nation drool over his trademark move for years. There's no getting around the fact that the

public interest in him goes far beyond explanation. Staying in one of Mumbai's costliest

in all these dos, the actor never fails to connect with his hundreds of fans sitting everyday

outside Mannat wanting to have a piece of him. So he too, like many actors, climbs his wall,

waves at the stampede and air kisses them all. And then he pauses to utter this, "I don't want

you to be my fan. I want you to be mine". And it is this line that makes him, and only him, one

of the biggest superstars to walk the planet.

I present you Part 2 of my special chit-chat with Shah Rukh Khan from Mannat, where he talks

biopics, business and his future in television - all heart to heart.

Biopics make a very interesting cinematic experience. In whose shoes would you like to fit

in?
Any of them yaar! I've been telling my friends for the past six to seven years that I want to do

into that biopic. Asoka is hardly a biopic and Chak De India is based on someone I

know but it's not entirely a biopic. But if you ask me interesting characters, I'd love to do a

Charles Shobhraj. I know it's not an interesting thing to do (laughs). I'd love to do the real

Natwarlal, the conman. These negative characters make for an interesting, not appreciable life.

I'd like to do sports personality. I would love to do a boxing film. I still like to do it. In

the Indian context there might not be many known so it will be a difficult subject to do. I

would've done Bhaag Milkha Bhaag but I didn't have the dedication and time to do it.

Farhan has taken it to a different level and I always knew that. I can do anything - from a

philanthropist to a business head, I'd change myself physically and mentally to get into them. I

anything. But it has to excite me. Whoever is making a biopic with me, I'll have to tell that

person to leave me alone for a month or two so I can get into the character. Even My Name is

Khan was, in a generic way, talking about a very serious issue. I couldn't mess around with

it. I told Karan Johar to wait three months so that I could finish everything else I was doing.

I told him I'll get the autism part right and that he need not worry. I want to do a biopic with

dedication. Rahul Dholakia has a biopic that I am very interested in doing. I haven't committed.

Somebody told me I should do 'Dhyan Chand'. He was one of the greatest people my father talked

about. He talked about Mohammed Ali too and that's why I would love to do a boxing film.

You've got your first 200 crore film after two decades. The next feat will be

300 crores. But how much of the business do you think will change in the next five months and

for you to hit the next target?
It doesn't work for me in this calculation. I am an actor. When I am called to Taj Lands End to

speak about a serious issue, I go prepared and speak that language. I can't speak the language

unless the topic is there. The topic in this case is a film like Chennai Express. It

speaks the language the people have been speaking for the last four years. Now you know the

answer. So take the monkey off my back and the donkeys off my head. This is a film that speaks

the language in terms of numbers. It's an entertainer and comes during a holiday period. You

can't release a My Name Is Khan and speak that language. You'll be fighting a losing

battle. Chennai Express is a very popular film made by the most popular director of our

house of our country. Red Chillies has made the biggest hit this country has ever seen. I am

proud of that and it'll do very well for everybody. My choice of movies will never be dictated

by the language of numbers or the opinion of guys who praise movies. If my heart tells me to do

a film, I believe a lot of other hearts will attach to it. Numbers will follow if it's that kind

office bang on?
And very seldom it happens for every actor that a film comes along and convinces all three - the

creative of the actor and the director, the appraisal of the film and the box office numbers.

All these movies came from the heart, especially Shimit's. So here was a guy who assisted my

director on Darr, who came from America and wanted to make a film on hockey with women in

it. Yes, he speaks with an accent too (laughs). He has edited Asoka too. So I knew him.

It came from the heart. Swades was made like that. I loved Jodhaa Akbar. Ashutosh

Gowariker told me once, "My dad says after making an important film like Lagaan, people

will throng to see your film. Make a film that says something important". I asked him if it has

the potential and he again said, "Sha, my dad wants". I immediately said 'Yes' because a

friend's dad wanted to. I think the choices are like that.

Now that American television shows are gaining more popularity over their movies, as a

visionary, would you like to dabble in Indian TV too like you did years back with Fauji and

Circus?
I think it's a fantastic thought to bring the best of the director and actors and producers to

make T.V. shows but in India, business is personal. It's just not business. So till people

actually in India start to realize the importance of business as business, I don't think there

are too many people coming together and doing jobs. It's unfortunate. It's a sign of a developed

business doing nation. It's got nothing to do with my personal relations with anybody. I'll give

you an example. In Japan, it's highly wrong that if you make the same product and I make the

same product, except buying, there is no talk. Mushtaq Sheikh and Shah Rukh Khan are friends but

if we do business it has to be only business. Japanese make square watermelons as it's easier to

carry and there was a meeting once done after the price rise in Japan. One decision was taken

that changed the Japanese economy. They shared the transport but in that truck the products

would be of three different companies. They'll never go personal. In India, it's still personal.

There are very few people like Ronnie Screwvala who, when they sit across the table, they'll

only talk business. Peter Jackson goes to Steven Speilberg because the latter has the rights of

Tin Tin. Peter Jackson says, "You're dying to make it and I am ready to make it." Both

join hands and make one of the best movies of that year. In India, a few studio houses know how

am dying to do T.V. shows because there are certain stories that can't be told in two or three

hours. Anil Kapoor and Amitabh Bachchan have started. I would love to produce it and creatively

be a part of some series on Indian television.

Watch this space for the finale - Part 3.