The ‘fabulous wife’ of Sanjay Kapoor decided to celebrate her husband’s 60th in the most lavish way. Apart from planning a Dubai trip with her family, the celebrations too continued for almost a week. Exploring restaurants, locales, and catching up with friends, and partying seems to have summarized the celebratory moments, and giving a glimpse of it was Maheep Kapoor. While she was always active on social media, this Mrs. Kapoor however has boosted her presence on the platform after her latest stint with reality shows. 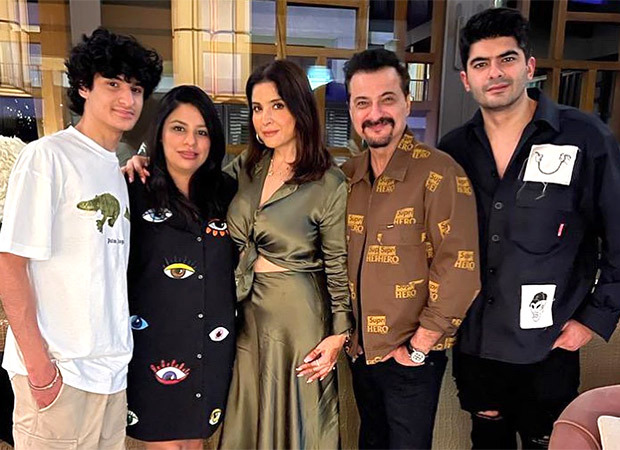 Inside the Dubai birthday bash of Sanjay Kapoor: Maheep Kapoor shares photos of food and fun with family

Not too long ago, Maheep Kapoor shared a compilation of throwback and current photographs from the Karwa Chauth festivities which generally comprise of a big celebration in the Kapoor household. Now, the ‘Bollywood wife’ has gone on to share several glimpses from her latest Dubai trip with her husband Sanjay Kapoor, son Jahaan and daughter Shanaya Kapoor. While she has already shared a few of them in the past, the recent ones include photos and videos from the celebration at Kayto Dubai. The photos include some moments with family and the birthday boy Sanjay Kapoor as well as a sneak-peek into the lovely food served by the restaurant. In a video shared by Maheep, we also get a glimpse of the cake, which is not made out of flour or frosting but only layers of fresh fruits.

Sharing these photos on social media, Maheep also thanked the restaurant and its staff for their hospitality saying, “Everything is extra special with family ?????? #AmazingFood #AmazingStaff ?? #LovedTheExperience #TasteofJumeirah #KaytoDubai #JumeirahAlNaseem #TimeExceptionallyWellSpent #JumeirahHotels @kaytodubai @jumeirahgroup” The photos also received a lot of thumbs up from fans who dropped heart emojis to shower their love on this Kapoor family.

Maheep Kapoor, who started as a model, is currently a jewelry designer. While she was away from the limelight for quite some time now, she and her group of friends suddenly shot to fame with the growing popularity of their reality show The Fabulous Lives of Bollywood Wives. The show features her along with her girl gang which includes Bhavana Pandey, yesteryear star Neelam Kothari, and Seema Sajdeh.