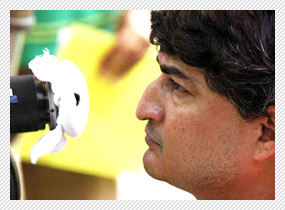 Dying while eating a crab is not the best exeunt from life. In Goa one of our youngest and most brilliant cinematographers Bobby Singh passed away suddenly on Tuesday evening. The most badly affected was filmmaker Anurag Basu who worked with Bobby in Gangster, Woh Lamhe and Life...In A Metro.

Says Anurag, "Bobby was one of my three close friends. Our relationship went way beyond work. What can I say? I can't believe he's gone. I am just hoping it's a prank and that I'll be soon told he's still around. Bobby was one of the most jovial persons I've met. We were really close friends." Anurag flew to Goa as soon as he heard the news.

Apparently the happy-go-luck DOP (Director Of Photography) had a lunch of crab and died of an asthmatic attack soon after, thereby cutting a brilliant career short. He leaves behind his shell-shocked wife Radhika and a young 5 year old son Sumer. Actor Sanjay Suri was holidaying with Bobby in Goa when the tragedy happened.

Bobby who started his career as an assistant cameraman in 1989 in Raj Sippy's Shehzaade soon graduated to doing additional photography in A Murugadoss' Ghajini. Bobby was the DOP of two films Vikas Bahl's Queen and Neeraj Pandey's Special 26 when he suddenly passed away.

Madhu Mantena, the producer of Ghajini and Queen is in a state of utter shock on hearing the news. "How can anyone die of eating crab? I just heard the news. We're in a state of shock. We aren't bothered about how Queen would be completed. We're just wondering how anyone can die so suddenly and randomly!"

Adds Mukesh Bhatt, "I'm in a state of shock. I am not able to absorb the enormity of the tragedy. Actually I can't speak."

Sanjay Gadhvi who worked with Bobby in Kidnap was shocked by the suddenness of death. "I was close to him and his wife Radhika. He was full of life. Always in the mood for fun. Always making everyone smile. He was a damn good DOP. Our friendship went beyond work. Why did he have to go so suddenly? Life seems so meaningless."

While Bobby's work in Special 26 is complete, his passing away is a severe blow to Vikas Bahl's Kangna Ranaut starrer Queen which is yet to be completed. One hears efforts are on to complete the film without another cinematographer since bringing in a replacement at this late stage when the film in 90 percent complete would take away from the work that Bobby Singh has done.

Says a source close to the project, "We don't want to bring another cinematographer in the picture. We want Queen to be Bobby's swan song. We know what he has done in the film. To carry it to its conclusion wouldn't be easy. But we'll try."