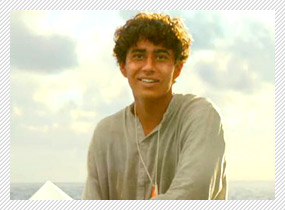 The boy from Delhi who has played the lead in Ang Lee's adaptation of Yann Martel's novel The Life Of Pi was 17 when he signed the film. At 19 he now feels like a different person.


"My entire life has undergone a change during these last two years. I feel different from inside. I think I've become a better human being. But I still don't know whether I can act or not," says Suraj who feels he is more passionate about filmmaking than acting.


"The past year has changed me completely. I think I kinda grew up. I've learnt a billion things. It might sound melodramatic. But it's the truth. The most important thing I learnt is patience and endurance. Initially when we started preparing for the film I used to grumble about all the intense physical training I had to go through. 'Mere haath main dard ho raha haiâ€¦mujhse yeh nahin hoga, woh nahin hoga'. They just kept pushing me. Then one day I went up to my instructor who had also become my very good friend and said, 'I know what you were trying to teach me. Most things are possible if you stop thinking whether you can succeed or not. Stop pressurizing yourself. Just do what you have to do.'


Suraj still looks back on the experience of shooting a script that features exotic animals and even more exotic actors like Irrfan, Tabu and Adil Husain with wonderment. "I just followed them blindly. I was the only one in the cast and crew with no experience. Everybody around was knowledgeable. Honestly, all I did was to listen to them. What else could I do? When you don't know what you're doing you might as well listen to those who do. I listened to my director Ang Lee and everyone.


Recently in September at the New York Film Festival Suraj saw himself on screen for the first time. "It was the first time I saw the film in any other colour except blue. When we were shooting the whole film was being done in the blue colour. When I walked into the theatre I thought, 'Oh my God, finally I'll be exposed. Kafi awkward hoga seeing myself for the first time. I had no experience in acting when I was signed. So I was naturally nervous. But when I saw the film I suddenly saw all these vibrant colours and these stunning visuals. Yeah, Ang (Lee) is really good at what he does! The special effects team has done a brilliant job. When I saw the film I feltâ€¦good! Initially I was awkward about seeing myself. I tried not to look too much at myself on screen. That wasn't too hard because there's really so much to see in the film. It's a visual feast and treat."


Suraj thinks acting is no big deal. "Given the right circumstances anyone can act. It's just about feeling the right emotions on cue. You just need to react to the given situation. I think I am okay in the film. I had Ang. I had this awesome crew behind me. I never felt under any pressure. I am not being modest. I genuinely feel I was able to pull this off because of Ang and the team. Anyone can do it given the right environment and guidance. And if you have Ang for a director the job is even easier."

Folklore has it that Suraj was chosen out of 3000 candidates who applied for the role of the protagonist Pi Patel .


Suraj is nonchalant. "Mere ko pataa ttha. I had heard about that. In Delhi, I had just gone to the audition as moral support to my brother who's an actor. I was just sitting around in the couch. Dilip Shankar who's my brother's acting teacher and a family friend advised me to give it a shot. Honestly, I didn't have any idea of what I was doing or that I'd get selected. I guess I just got lucky. I kept getting calls from them and I was finally told I had to go to Mumbai to meet Ang. Then I did my audition and I thought I had flunked. Main apne lines bhool gaya. I was pretty nervous. I thought Ang would kick me out then and there. Then I did the scene again. And I started crying. Yeah, I teared up during the scene. And I guess they liked it. Even I felt the second audition was kinda real."


Thereafter Suraj was called to Taiwan for training before the shooting. After being signed he read up the novel by Yann Martel. "Initially I didn't know what I was auditioning for. But the minute I found out what it was for I read up the novel, not once but thrice. The first time when I read it, the images played in my head. I was like, 'What the hell! I'm missing something. Then again it was still messing up my head. So I read it again. By then the script had arrive. So I turned to the script for a clearer interpretation."


Suraj says his equation with his family and friends remains unchanged. "Everyone around me is excited about the film. It's reassuring to come back to my normal life and to know they're still there for me, still the same. I try not to project myself as being someone different from what I was before I went into this film. In many ways I am still the same. In many ways I've changed. But nope, this experience has not isolated me from my family and friends. My friends are still my friends. For this, I've Ang and the crew to thank. They warned me this experience may change my equation with my inner circle. So I made a conscious effort on that front."


Because of the shooting Suraj's studies got affected. "But in a strangely positive way. I finished shooting came back and did my Class 12 all over again. Before the movie I was a 50 percenter. Now after I came back from the shooting I scored 90 percent. The movie taught me to concentrate and work hard."


So a career in the movies? Suraj is unsure. "I don't really know. I never expected I'd work in a movie. Until now it hasn't sunk in. I am beginning to realize it's quite a big deal. Let's see what comes my way. But I do know I want to be a filmmaker. I want to tell stories to the world. Being on the sets is an experience that I want to relive again and again. It gives me goosebumps to think about it."