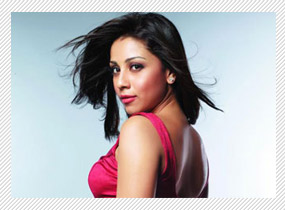 Here's 31 minutes in my life. Actually, 31 minutes and 45 seconds according to the counter on my dictaphone when I finish my conversation with the talented, petite and a bit demure Amrita Puri in Costa. Sans make up, wearing those big vintage black sunglasses, her hair unkept and in her impeccable outfit, Puri puts an instant smile on my face just like her instant coffee she orders. Three films old but Puri is sure creating her stamp when it comes to versatility embedded in actress that is a rarity. Aisha proved it and Blood Money's sudden surprise at the box office took it further. Playing a Gujarati girl living in Ahmedabad, Amrita may get the gujju boys drooling but for the time being she is drooling too with Kai Po Che's success. An unfamiliar role but a familiar success or even more. This is Amrita Puri uncensored!

What sort of friends have you had as a child and how do you define friendship?
Friendship is important in everyone's life. There are people who I need to be in constant touch with. They are my anchors. They make or break my day. I am very happy with the friends I have surrounding me. There's Vasudha, Ritika Jolly, etc etc. I have so many friends that I can miss out on so really don't want to name and then get a beating (laughs). I call one of my friends Nemo (laughs).

There are so many movies based on friendship. How niche is Kai Po Che?
I think friendship is equivalent of love. People have been making them for generations. Any friendship movie is relatable. But the fact that Kai Po Che is rooted in middle class India is its strength. It's not ZNMD or Dil Chahta Hai. It's not slick like them. It's too aspiring like we all are in real life. It's not about cars and gadgets. It's soaked in culture and tradition.

Of course it's about cars. Remember the first shot of all three boys in the car in the trailer of Kai Po Che?
That's very well put (laughs). Yes. They aspire to have a car, why not? That is so cool. It's the kind of fun you have with friends. Being on a truck in a car that is not moving and you are drinking and talking less sense is crazy. It's not like jumping off the plane kind of fun. Even that fun is real.

So, what did you aspire to be before the acting bug bit you?
Before I got into acting, I was a freelance copywriter. I am someone who is socially inclined into wanting to change the political scenario of our country. I thought of IAS. I was thinking how to make a change in the structural root level. But I couldn't study further because those exams are really tough. I am not biased towards any party or politician. In a broader sense I do follow politics though.

Kai Po Che handles politics of the Godhra Riots and the worst Earthquake ever witnessed in Gujarat. That's enough to create controversy.
I disagree. The film isn't taking a political turn. Kai Po Che is about these three friends and their dreams and their reality. Yes, its set in the time period of riots and earthquake but how their friendship is affected with the two scenarios is what the film is talking about. Kai Po Che touches upon the real issues but largely its about the friendship between the three boys.

Doing Garba with your co-star Raj Kumar who wears a 'Kediyu' was awesome. I loved it.

What? You call that dress 'kediyu' ? (Laughs). I never knew about it. Thanks! I will use it in my other interviews. There's a song called 'Shubharambh' and there's a full garba song in the film 'Pari Hoon Main' for which the director has taken the rights to. It's picturized on it. So yes, Gattu (Abhishek Kapoor) wanted to get all the authentic garba dancers for the song. If I am a girl from Ahmedabad, I better know how to do garba. I did get it right somehow (laughs).

It's one of the hottest cities in India during summer. How did you cope up with the heat?
Tell me about it! Firstly, the shooting was in Gujarat, Ahmedabad. Then sequences of kite flying on the terrace. It was another level of hotness. Sushant almost fainted. It was so hot. No one can hold an umbrella when the shoot is on. During the kite flying, we had the worst weather. I can say that I've done this film without make up as the make up would be only applied a few minutes before the shot. Plus, we had to switch off the ac's and air coolers. We had so many people falling sick on the sets. Gattu told me to keep drinking lots of water but I didn't listen to him.

How much of the book do you think has been adapted into the film?
Chetan hasn't changed the characters one bit. Chetan knew the characters more than Gattu did. In the book, my character has a nice French manicure. Gattu made sure that he focused on my nails quite a bit. It's a blink and miss moment but little things, details is what he's taken care of. He has changed quite a bit but Chetan deserves a lot of credit for this. Adapting a book is an art and Gattu has done it with utmost gusto.

You are just climbing up the ladder of success with your films and the banners you've been associated with. Soaring high huh?
I'm so glad you've noticed this. Yes, I am very happy and fortunate to have worked with AKFC and Mahesh Bhatt and now UTV. It's a learning experience. I will totally work with new directors. A new production house, well, it depends. But I want to take a wise decision in the films I do from here on. All I want to do is good work and prove myself as a talented actress because this is what I've come here to do. I will never lose my focus.